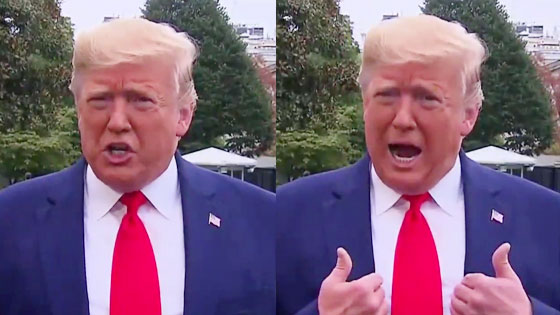 Yesterday, I reported on the clash between Donald Trump and Reuters reporter Jeff Mason during a White House press event wherein Mason asked Trump what it was he wanted the president of Ukraine to do in regard to investigating former Vice President Joe Biden and his son, Hunter.

Trump was evasive in the moment and went on a rant about European countries ‘not paying enough.’

Today, Trump was asked the question again – “What exactly did you hope the Ukrainian president would do about the Bidens?” – and this time, Trump not only said (live on TV) that Ukraine should investigate the Bidens but he also invited China to suss out dirt on the Bidens.

Basically, Trump not only did what the whistleblower accused him of in his complaint to Congress, but he actually committed a second offense by inviting China, a geopolitical opponent of the U.S., to investigate his possible Democratic opponent in the 2020 presidential election.

REPORTER: What exactly did you hope the Ukrainian president would do about the Bidens?

TRUMP: "I would think that if they were honest about it, they'd start a major investigation … they should investigate the Bidens … China likewise should start an investigation." pic.twitter.com/gLVBjmSs3q

Shep: "For days the president and his allies have been suggesting … that the president didn't really ask Ukraine to investigate his political rival, that the complaint is total fiction. Today, the president did exactly what he's accused of doing, this time on live television." pic.twitter.com/YI1Ghh3irO

And this time there is a verbatim transcript. https://t.co/dgBNLcxmIX

The quid pro quo with China is the trade war.

Investigate Biden and I’ll give you a good deal.

Americans by a 45%-38% plurality now support a vote by the House to impeach Trump, a USA TODAY/Ipsos Poll finds.

By a similar margin, 44%-35%, those surveyed say the Senate should convict Trump and remove him from office.