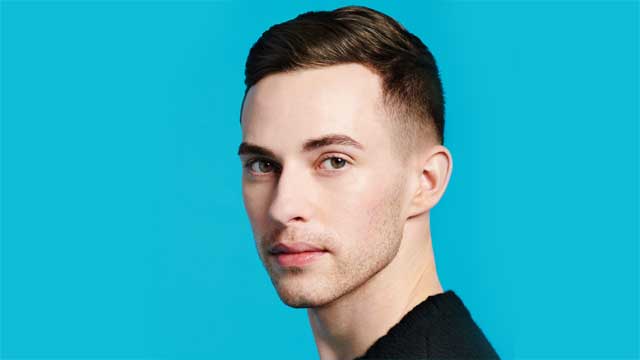 As the oldest rookie to qualify for the Olympics at 28-years-old, and the first openly gay American figure skater to compete at the Olympics, his path to success has been groundbreaking, although it hasn’t been without setbacks.

In his new memoir, Beautiful On The Outside, Rippon hilariously reveals what it’s like to be an elite figure skater – from the glitz of sequined costumes to the unglamorous act of cleaning bugs off the ice at a competition, and all the failure and quad lutz practice (the hardest quad jump to land in competition) that led him to a spot on the Olympic team in Pyeongchang. 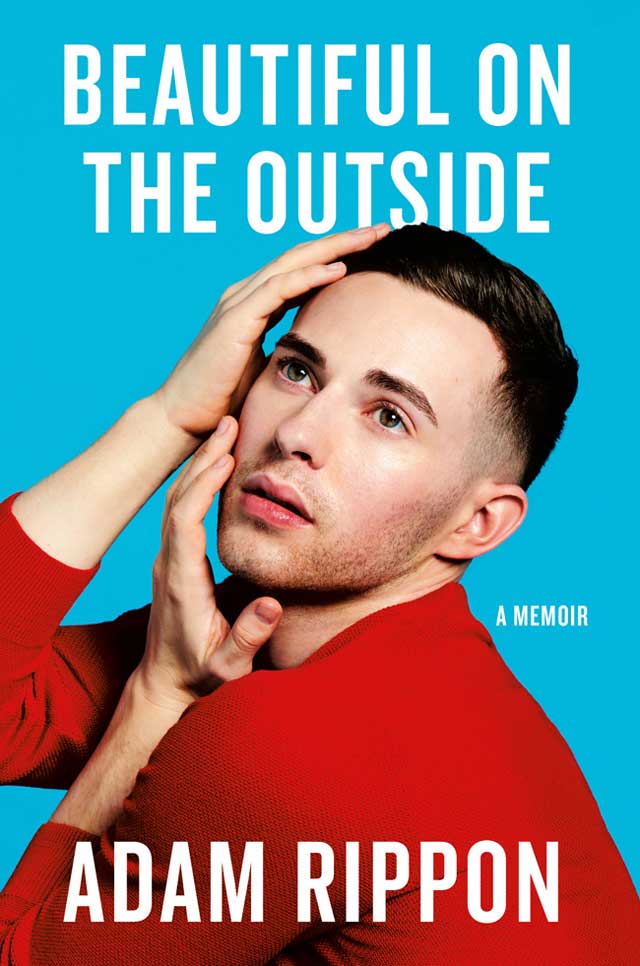 Your mom probably told you it’s what on the inside that counts. Well, then she was never a competitive figure skater.

Rippon has been making it pretty for the judges even when, just below the surface, everything was an absolute mess. Traveling to practices on a Greyhound bus next to ex-convicts, being so poor he could only afford to eat the free apples at his gym, Rippon got through the toughest times with a smile on his face, a glint in his eye, and quip ready for anyone listening.

Beautiful On The Outside looks at his journey from a homeschooled kid in Scranton, Pennsylvania, to a self-professed American sweetheart on the world stage and all the disasters and self-delusions it took to get him there.

Sure, it may be what’s on the inside that counts, but life is so much better when it’s beautiful on the outside.

I  recently chatted one-on-one with the Dancing with the Stars champion about his new memoir, the journey taken and what’s next for the sassy world-class athlete.

You can listen to the full chat with Adam below:

Here’s some highlights from my chat with Adam:

The Randy Report: First of all, congratulations on the memoir. It reads just like the Adam Rippon America has grown to love.

Adam Rippon: Thank you. It was so important to me that it felt more like a conversation I would have with someone rather than at someone.

TRR: When I first started reading I was not prepared for how much of your humor would be in this. Every page…good for you for capturing that aspect of you.

AR: Honestly, it’s still surreal to speak to people who have read the book because it’s been this project I’ve been working on for a long time. It was important to me that it was something funny. I feel this book has been an opportunity for me to speak about a chapter of my life as I move into the next chapter.

TRR: Early in the book you write that you loved looking back at crushes on girls when you were young, and you saw it as an early form of ‘diva worship,’ which I totally get as a gay man because I loved girls too. What a great way to put that.

AR: I think that like when you don’t know what’s going on in your body and how you actually feel that when I look back, the girls that I honestly felt like I was really attracted to, it was they had these really, these personalities that I admired, and these are the attributes that I thought were so great. I so badly did not want to be gay, but I tried so hard to associate these feelings of admiration with love. And looking back, I truly did have feelings for the girls that I was with. But – like the first time I was ever with a boy, I was like…”Oh.”

AR: It felt so different that I was like, “Oh no, I’m done.” Like I figured it out. What was I thinking before?

TRR: Later, you write that you didn’t have sex with girls sometimes because you thought you were being the ‘good guy. I think there are a lot of gay men who will read that, and feel they did the exact same thing.

AR: I just remember that feeling of not doing anything because, like, ‘I’m one of the good guys,’ you know? Then you learn. You’re like, ‘Oh no…’

TRR: And nature kicks in…

AR: It’s like this isn’t for you, and you’ll figure out why in a little bit. And then, it hits you over the head like a bag of rocks.

TRR: Let’s talk about skating because the chapter chronicling the 2015 Nationals beautifully captures you finding and bringing your A-game.

AR: Thank you. To be honest, I had such a great team help me write this book because I would describe myself more as a storyteller than a writer. And so, a lot of people worked with me to put it together.

It was important for me to share that story in particular because, at 2015 nationals, I skated these two great programs. In the first one, there was this sort of feeling that I was a little bit shafted.

And the next one was the long program where I get this amazing score and I felt like everything was coming together. I had just left this boyfriend that was a nightmare, and it was like, “Oh my God, in this moment, everything’s coming together.”

And then the last skater goes out – they win, I’m second. And I’m like come on really?

But then I realized that was such a non-issue because I was so proud and happy about everything I had done. And then, when I could take a step back, I was actually really excited and proud of the boy that had won because he had a lot of pressure on him to skate well, and I realized that the placement really had nothing to do with it, or like the award had nothing to do with your self-worth.

And once I was able to like disassociate the two, I felt that it was such a life-defining moment because I was able to focus more on myself than I was on anything else going on.

😈 On to the long program tomorrow! #uschamps18

TRR: And then you get to the Olympics. Finally. And you share that you wanted to show the world you had more than ‘sass’ to offer. You had overcome a LOT, and you’re in such a good headspace at that point. As the reader, I feel like we’re really there with you.

AR: It was like this hyper-focused period of my life where I was so in control of what I was doing, and I was so in the present moment. That was really a culmination of everything I had gone through, and how I had learned to be there, I’d learned to separate the media aspect of a competition from the competition part.

And it was like I was giving myself this masterclass of mastering how to juggle two things at once. I was so in the moment, and I felt so how powerful. Looking back, I’m like, “Holy shit, I don’t really know how I did that!” But I think all of the ups and downs I went through prepared me for it.

TRR: You also share a bit on how you and fellow out Olympian Gus Kenworthy came to be virtual friends prior to the Games, and then you met at the opening ceremonies and entered together.

AR: It felt like a moment that was not just for me; it felt like a moment that was for my younger self and for other people to see who might be gay but think that they would never share it with someone else. And here I am standing with someone from a different sport, from a different part of the U.S., different corners of the sporting world. So different. And here we are walking in as like friends, and we’re representing the (LGBTQ) community as we’ve gone through these different journeys at the same time.

I can look at him and he can look at me and we were like, “I get it.” And that’s why it was so powerful. I walked away from the Games with Gus being somebody who, in that moment, our whole lives kind of changed together. I really feel we are linked together because of a moment like that.

‪Tonight I walked in the #OpeningCeremony and got to watch my old friend @yunakim light the Olympic flame. Representing the USA is one of the greatest honors of my life and being able to do it as my authentic self makes it all so much sweeter 🇺🇸🏳️‍🌈🏆🌎❤️🔥

TRR: Speaking of post-Olympics, there’s a great quote from you near the end of the book as you’re performing in Stars On Ice and competing at the same time on Dancing with the Stars (which you won, btw). And you’re exhausted. But you stop and get down to the realness telling yourself, “I earned being this tired, I did not earn getting bitter.” What a great moment of self-awareness.

AR: I was doing all of those interviews, a lot of press, I was touring, doing Dancing with the Stars, and I was sleeping two or three hours a night. And working to be ‘on’ so that I could give everybody my best self, and be physically and mentally there. And it was really, really challenging.

I remember thinking to myself, there is probably not going to be another time in your life where you have two huge projects going on at the same time and they’re organized down to the minute so that you can get a nap every night.

I reminded myself that the way that you feel this exhaustion is what you would have done anything to feel. You can’t look at it and be in this moment now and think, “But I didn’t know any better!” You knew this is what it is, this is what comes with it. Accept it and enjoy it.

Hi @carrieanninaba, I know you said that sometimes you couldn’t tell who the professional is but I think I figured it out 😂😂😂

TRR: Thank you for the chat, Adam. You are truly America’s sweetheart.

AR: Thank you so much. You have a great day. Thank you.

In addition to releasing Beautiful On The Outside (available now online and at book stores), Rippon shares that he will be hosting a new daily show on Quibi,  the upcoming short-form mobile TV streaming service set to launch in the spring of 2020.

On This Day In Useless Celebrity History, Rippon will take viewers on a ride down memory lane, revisiting the wildest and most outrageous events in celebrity history that might have been forgotten, but shouldn’t have.

Make sure to catch up with Adam on his book tour beginning today in New York City and heading out across the country from there.