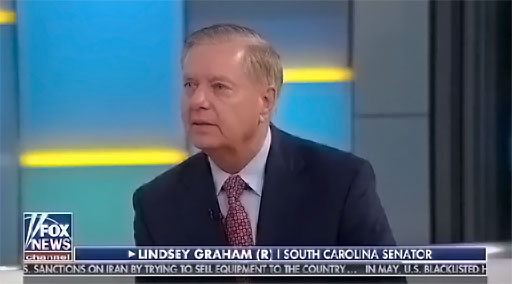 Sen. Lindsey Graham (R-SC) went to bat for Donald Trump this morning during an appearance on Fox & Friends as he called “the squad,” a group of four freshman progressive Democratic lawmakers, “a bunch of communists…anti-American.”

“We all know AOC and this crowd are a bunch of communists. They hate Israel, they hate our own country. They’re calling the guards along our border, Border Patrol agents concentration camp guards. They accuse people supporting Israel of doing it for the Benjamins.”

“They’re anti-Semitic. They’re anti-America. Don’t get down, aim higher. We don’t need to know anything about them personally. Talk about their policies. Their policies will destroy this country.”

.@LindseyGrahamSC on Fox & Friends: “We all know that AOC and this crowd are a bunch of communists … they’re anti-Semitic. They’re anti-America.” pic.twitter.com/lsFqZi1Eu8

Four years ago, Lindsey Graham called out Trump’s racism and xenophobia. Now he’s gaslighting to protect it. His transformation from skeptic to stooge has been one of the most pitiful one-eighties in political history. https://t.co/zAnsKgzMza

Rep. Will Hurd (R-TX) is the only Republican member of the House to denounce Trump’s racist tweets at this time.

JUST IN: Rep. @HurdOnTheHill (R, Texas) tells me that he believes President Trump’s tweets on Sunday “were racist and xenophobic.”

Trump continued his attacks on the four Democrats Monday morning saying they should “apologize” for the “foul language they have used.”

When will the Radical Left Congresswomen apologize to our Country, the people of Israel and even to the Office of the President, for the foul language they have used, and the terrible things they have said. So many people are angry at them & their horrible & disgusting actions!