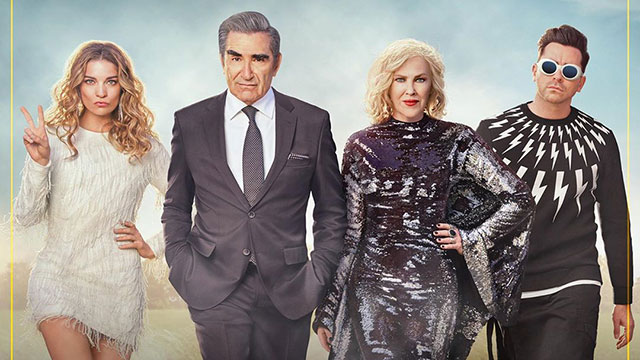 GALECA: The Society of LGBTQ Entertainment Critics has announced the nominees for its first separate Dorian TV Awards.

One series that definitely breaks the mold is CBS All Access’ The Good Fight, the tense, socially relevant and increasingly inventive drama set at a Black-run law firm in Chicago. Fight is up for Best TV Drama (as well as Best Unsung TV Show) alongside Netflix’s ever-polished Brit royals opus The Crown and tricky-couple crime drama Ozark, and two other twisty morality tales, AMC networks’ Killing Eve and Better Call Saul.

In addition to Creek — a previous Dorian Award winner when GALECA combined its film and TV kudos in one package — the Best TV Comedy contenders include three past Dorian Award nominees: Insecure (HBO), Better Things (FX) and The Good Place (NBC). Competing against them are Netflix’s gallows-humored, female-powered mystery-comedy Dead to Me (stars Christina Applegate and Linda Cardellini vie for Best TV Performance — Actress) and FX’s bloody-fun vampire comedy, What We Do in the Shadows (which counts two additional nods).

Although the miniseries Hollywood, from bad boy producer Ryan Murphy, didn’t make that short list, it did nab four acting nominations as well as ones for LGBTQ Show of the Year and Visually Striking Show. Other cinematic eye-fillers in the latter race include the likes of Disney+’s The Mandalorian and HBO’s Westworld.

And no Dorian Awards list would be complete without GALECA’s trademark category, Campiest TV Show. Vying for that cheeky honor are Hulu’s royal romp The Great, perennial members favorite RuPaul’s Drag Race (VH1), and Netflix hmmm-inducers AJ and the Queen, Dolly Parton’s Heartstrings and a certain expose of some exotic Oklahomans and Floridians, Tiger King: Murder, Mayhem and Madness.

Via its original banner Gay and Lesbian Entertainment Critics Association, GALECA’s Dorian Awards have gone to the best of all of film and TV — not only LGBTQ-themed — since 2010. While this year marks the inaugural Dorian TV Awards, this is actually the 11th go-around for members voting on their best-loved TV programs and stars.

TV winners will be announced on August 21, when the Society will also name the recipient of its first “You Deserve an Award!” Award, going to what the group deems “a uniquely talented TV icon (they) adore.”

In full disclosure, as I’ve noted before, I am a voting member of GALECA.

BEST UNSUNG TV SHOW
Everything’s Gonna Be Okay (Freeform)
Gentified (Netflix)
The Good Fight (CBS All Access)
Mrs. Fletcher (HBO)
One Day at a Time (Pop)
Vida (Starz)
What We Do in the Shadows (FX)
Work in Progress (Showtime)