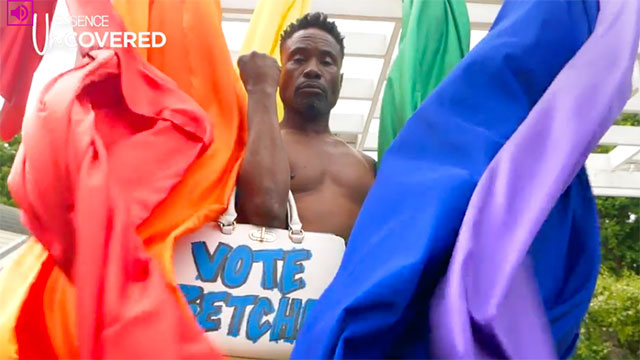 Chalk up another first for Grammy/Tony/Emmy Award-winner Billy Porter as he becomes the first openly gay Black man to appear on the cover of ESSENCE Magazine.

It’s not the first barrier broken by the Pose star. Last year, he was the first gay Black man to win an Emmy Award in an acting category. And, he was also the first man to cover Allure Magazine.

In the cover story for Essence, titled ‘Why Billy Porter is a National Treasure,’ writer Tre’vell Anderson chronicles Porter’s journey to ‘here.’

‘Here’ is where Porter finds himself after multiple gigs on Broadway in the 1990s (Five Guys Named Moe, Miss Saigon, Grease) which ultimately led to his stepping out of the spotlight after being passed over for the serious roles he desired (and deserved) and would eventually appear in (Angels In America, Kinky Boots).

“I chose myself over whatever might be,” he says, noting his number of years of unemployment after he made the choice to ‘lean into’ his truth. “But by taking myself out of the masculinity game, that literally turned my life around, and all of those layers were building blocks to the authentic human being you see in front of you who gives zero f–ks.

“When I actually leaned into my truth,” he adds, “this is what ultimately happened. Did it take two-plus decades? Yes, but it’s happening and this is my ministry.”

He also discusses his recent cover of Buffalo Springfield’s 1966 activism classic “For What It’s Worth.”

“Being first-generation post-civil rights and feeding directly into, as a gay man, the AIDS crisis, activism is in my DNA,” Porter says. “And while I don’t fancy myself an organizer, you tell me where to show up, I’m going to show up. I’m that kind of activist.”

Porter also directly addresses the conflict he sees while standing at the intersection of the Black Lives Matter movement and the homophobia he’s experienced by conservative Black people.

“You all want to act like you’re concerned about our salvation,” he says referencing church-going African Americans who don’t embrace LGBTQ authenticity. “But don’t worry about my salvation. Let me do that. If you think I’m going to hell, you keep that s–t to yourself. I don’t need tolerance. I don’t need acceptance. We demand respect for our humanity, too.”

He also addresses the November election (“get your little asses registered”), and his upcoming projects including the role of ‘Fairy Godmother’ in Sony’s live-action remake of Cinderella.

It’s an excellent profile of an artist who has learned to lean into his own truth. “Did it take two-plus decades? Yes,” says Porter.”But it’s happening and this is my ministry.”

Read the full article at ESSENCE.

At every stage of his nearly 30-year career, @TheeBillyPorter has challenged norms. Today is no different. He is ready, as always, to start the conversations that bring about a reckoning—from the need to vote to the recent protests to the numerous murders of Black trans women. “What we’re seeing is a tipping point. But not just a tipping point over what has happened recently. It’s a tipping point 300 years in the making,” says the 50-year-old multihyphenate in our new issue. Tap the link in our bio for more on our July/August 2020 issue with #BillyPorter. Chief Content & Creative Officer: @MoanaLuu Deputy Editor: @alliemcgev Talent: @theebillyporter Writer: @rayzhon Creative Director: @nialawrence_nyc Entertainment Director: @corimurray Photographer: @jdthecombo Videographer: @jeanlondondia Fashion Stylist: @jasonrembert Groomer: @melissa.dezarate Barber: @fadedaddynyc Producer: @jbthegawd Social Media: @randa_writes Executive Producer: @nonepix

Go behind-the-scenes of our July/August 2020 issue with @theebillyporter. Tap the 🔗in our bio for more on our new issue.

@theebillyporter has worked hard over the years and it wasn’t always easy. But, all of those layers were building blocks to the authentic human being you see in front of you who gives zero f–ks. Tap the link in our bio for more on our July/August 2020 issue with #BillyPorter.