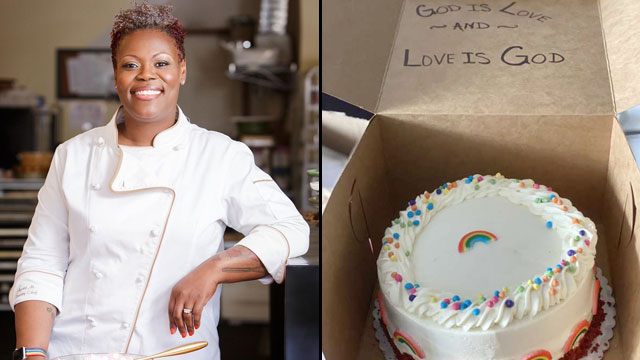 Seeing the word ‘PRIDE’ in capital letters in the order’s message, co-owner April Anderson (who’s baked cakes for Oprah Winfrey and appeared on The Today Show) initially thought it was for a six-layer, red velvet rainbow-themed cake which had been offered in June.

But then Anderson read the full message the anonymous customer wanted to be written on the top of the cake: “I am ordering this cake to celebrate and have PRIDE in true Christian marriage. I’d like you to write on the cake, in icing, ‘Homosexual acts are gravely evil. (Catholic Catechism 2357)'”

Anderson, who is openly lesbian and married, showed the order to her wife, Michelle, who was just as stunned.

“Why would somebody order this from us?,” Anderson said to the Detroit Free Press. “They know our bakery. It’s not like it’s a secret. It says it on our about page and social media pages and very clear that this bakery is owned by two lesbian women.”

Anderson shared the story of the hateful order with a friend who utilized reverse phone lookup services on the internet. Within an hour, the customer was identified as David Gordon, according to Pridesource.

Gordon apparently works for a nearby alt-right religious organization named the Church Militant. But don’t be fooled by the name – the group isn’t a ‘church’ but an extreme-right 501(c)(3) owned by St. Michael’s Media.

Sensing a set-up regarding some kind of reverse discrimination, religious freedoms, and free speech, Anderson decided to call Gordon’s bluff and prepare the cake, but without the icing message. The bakery’s website clearly states custom cakes have to be ordered either in person or over the phone.

Pridesource spoke to attorney Jay Kaplan, of the ACLU of Michigan’s LGBT Project, who said under Michigan’s public accommodation laws “the bakery had to provide” the cake that was requested. However, under the doctrine of ‘compelled speech,’ the business couldn’t be forced to create a message that goes against their moral compass or religious beliefs.

While this sounds vaguely familiar in comparison to the case of homophobic baker Jack Phillips of Colorado, who fought all the way to the U.S. Supreme Court to not have to bake a wedding cake for a gay couple, there’s an important difference here.

Phillips didn’t argue over messaging on a cake – he refused to make a cake for the gay couple because it was intended for a same-sex wedding celebration. The couple never asked for a specific message to be inscribed on the requested cake.

Phillips eventually prevailed at the Supreme Court but not on the issue of anti-LGBTQ discrimination. Instead, the high court found the Colorado Civil Rights Commission appeared to have lacked “the religious neutrality that the Constitution requires” when considering the case against Phillip’s Masterpiece Cakeshop and sent the case back for review.

In the end, Anderson did bake the cake with the requested rainbow theme on schedule – but sans icing message. She also included a note for Gordon explaining “what our bakery stands for, and who we are.”

“We feel the only ‘grave evil’ is the judgment that good Christians, like yourself, impose on folks that don’t meet their vision of what God wants them to be,” the letter said.

“We stand against hate; we will always fight for peace, justice, and inclusion,” she added.

She closed her note with, “We wish you PRIDE, rainbows, fairy dust and a good GAY!”

Gordon reportedly called the bakery the day before the scheduled pickup to confirm the order and was told, “Oh, yeah, we’re making the cake.”

Word got out on pro-LGBTQ social media about the cake order and a group decided to organize a peaceful rally in front of Good Cakes and Bakes at the time Gordon was to pick up his special cake.

Of course, Gordon was a no-show. Cowards always are.

It looks like @Church_Militant picked a fight with the wrong bakery. “Saturday afternoon came and went, but Gordon never appeared.”https://t.co/jxtl6rYdhU

“I think he was trolling us and he wanted me not to make the cake so that he would have an argument about us being discriminatory against him for not making a cake,” Anderson told Pridesource.

Five days later, Gordon phoned the bakery regarding the cake and was told it had been discarded. Anderson told him she would be happy to make another cake but he would need to order the replacement in person or over the phone for any special message to be

Contacted for comment by the Detroit Free Press, Gordon said in a Twitter message the bakery “never had any intention of serving me and making me the custom red velvet cake that I duly requested and paid for.”

Wrong – the bakery made your cake, dude. You didn’t show up even after confirming the order.

He also claims he was “denied the services I requested at a place of public accommodation on the basis of the content of my beliefs.”

Michael Voris, founder and president of St. Michael’s Media / Church Militant, said in a statement emailed to the Free Press: “The incident was an action taken independently of the apostolate by an individual employee; Church Militant had no prior knowledge of it. The employee has been spoken to and has apologized for unnecessarily involving his fellow workers in a private endeavor.”

The postscript to this little tale is a local resident, Oscar Renautt, who launched a GoFundMe campaign to raise money for signs to be legally posted near the Church Militant offices.

“I figured we need to do something to spread the awareness because our community should know one of our own was attacked this way,” Renautt told Pridesource. “But we are not ‘militant’ like these guys are. We are not militant as Church Militant. Our message is peaceful.”

The campaign quickly surpassed its goal and plans to order lawn signs that read “We are not Militant!” in order to deliver a peaceful message of equality. The balance of donations will be given to Corktown Health Center, the LGBTQ health center where Anderson’s wife works.