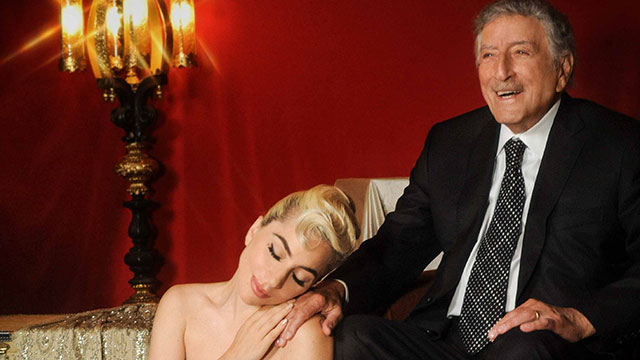 Music legend Tony Bennett and pop superstar Lady Gaga team up again for the upcoming collaborative album, Love For Sale, to be released on October 1. In advance of the release, check out the first single and video from the collection, Cole Porter’s classic, “I Get A Kick Out Of You.”

If you want to witness musical alchemy, check out the admiring looks on Lady Gaga & Tony Bennett’s faces as the other makes their magic.

The gorgeous big band arrangement of “I Get A Kick Out Of You” showcases Gaga crooning in her sweet spot. And Bennett serves up that swing-a-ding-ding that only he can do so well.

The  new collection will feature Tony’s last studio recordings, showcasing the Cole Porter songbook of classic popular music with both duet and solo selections from both artists.

At the time of the sessions, Bennett had already been diagnosed with Alzheimer’s, a condition the family made public in a disclosure earlier this year.

The iconic artists came up with the idea of exploring the Cole Porter songbook shortly after their first album, Cheek To Cheek, landed at #1 on the Billboard Album charts. The 2015 album features a sassy mix of jazz ensemble, big band and orchestral arrangements.

Bennett celebrated his 95th Birthday at Radio City Music Hall performing the songs he has spent a lifetime singing, sharing the stage with Gaga. ONE LAST TIME: AN EVENING WITH TONY BENNETT AND LADY GAGA sold out both Radio City performances for August 3rd and 5th within a day of going on sale to the public.

In celebration of Tony’s 95th Birthday, Lady Gaga has invited fans to post videos naming one thing they love about Tony to their Instagram Reels using the hashtag #Tonys95thBdayCard.

The Oscar and Grammy winner will choose her favorites and edit them together for a video highlighting 95 Reasons she and her fans love him.