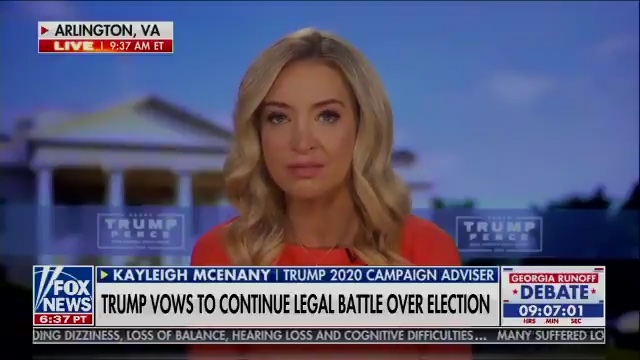 Kayleigh McEneny, who is employed by taxpayers as the White House press secretary and at the same time Donald Trump’s failed reelection campaign, called out Georgia Gov. Brian Kemp while inadvertently acknowledging that President-elect Joe Biden won the election.

Dead-ender Kayleigh McEnany yells at GA Gov. Kemp on Fox News: “You have the power to call in a special legislative session because right now if we lose these two Senate seats, guess whose casting the deciding vote in this country for our government? It will be Kamala Harris.” pic.twitter.com/IW2o55ohWs

When even Kemp is not dishonest enough for you.

This is racketeering. The powers of the White House do not include authority over how states run elections. Georgia held a lawful, Constitutional election. Using WH office of any kind to pressure others to corrupt that process is criminal abuse of office.

I think this is the result of raising children and calling them princess’ all their lives. A sense of entitlement in all that they do in life. Undermine democracy because you lost? Of course you can princess.

Even if Kemp decided to do what they are asking(he can’t), it wouldn’t put Biden below 270 or Trump up to 270. Biden didnt need Georgia to win. It’s just ice cream on the peach cobbler.

What if Dems control the Senate so there’s no gridlock — and a Covid Relief Bill actually gets passed — helping millions of Americans who are struggling, through no fault of their own.

Rich people gonna be mad! This is awful!