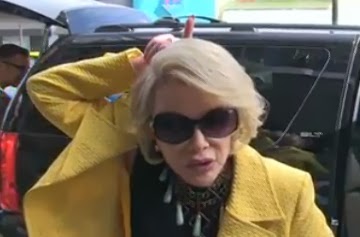 TMZ caught up to Joan Rivers outside Cantors Deli,  and when asked how she felt about Alec Baldwin’s recent rage-rant, Miss Joan had this to say:

TMZ: And we should be thankful for you.

Joan : Be thankful that we’re all living in America and stop everybody getting so damn uptight! And this goes for the Indians — both dot and feather!

She then politely wishes Mr. TMZ Happy Chanukah and gets in her limo.

Watch the video below from TMZ: