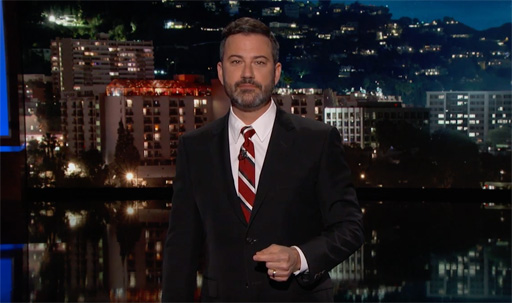 In the aftermath of Jimmy Kimmel’s monologue on Tuesday addressing the lies that Sen. Bill Cassidy had told on his show about healthcare legislation, Kimmel found himself as the target of attacks by various far-right pundits and politicians.

But it was Fox & Friends host Brian Kilmeade mocking Kimmel as a member of the “Hollywood elite” that really raised Kimmel’s ire:

“This is a guy, Brian Kilmeade, who whenever I see him, kisses my ass like a little boy meeting Batman. Oh, he’s such a fan. He follows me on Twitter. He asks me to write a blurb for his book, which I did. He calls my agent, looking for projects. He’s dying to be a member of the Hollywood elite. The only reason he’s not a member of the Hollywood elite is because nobody will hire him to be one.

“And you know, the reason I’m talking about this is because my son had an open heart surgery, then has to have two more, and because of that, I learned that there are kids with no insurance in the same situation. I don’t get anything out of this, Brian, you phony little creep. Oh, I’ll pound you when I see you. That is my blurb. That will be my blurb for your next book. ‘Brian Kilmeade is a phony little creep.’ That’s right.”

Kimmel tears apart Fox & Friends host Brian @kilmeade calling him “a phony creep” for attacking him on air and sucking up to him in private pic.twitter.com/jSFAfY4z6x

Kimmel also slapped back at Cassidy, Graham, and Christie during the segment.

This is excellent. Watch the entire monologue below.