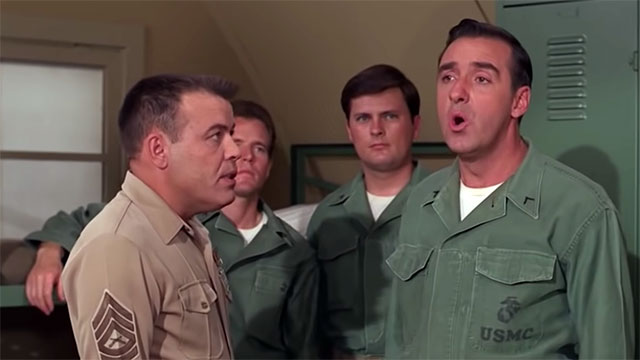 Jim Nabors remained closeted for over 5 decades as he became a household name on TV. LGBTQ historian Matt Baume takes a deep dive into the actor and singer’s Hollywood career (and scandals).

Over his 55-year career, Jim Nabors cultivated a wholesome, folksy persona, from playing Gomer Pyle on multiple sitcoms to appearing as himself on variety shows to singing every year at the start of the Indianapolis 500.

But behind the scenes, Jim Nabors harbored a secret that would have scandalized the country and ruined his career if it was ever found out — and in fact, it nearly did when rumors spread about his relationship with another closeted actor.

One of the big scandals that impacted Nabors’s career was an untrue rumor that he and Rock Hudson were secret lovers. Both were secretly gay, and were friends – not lovers. But the tabloid tales forced the two men to nearly end their friendship.

Just one little tidbit from Matt: In 1971, CBS had a whole slate of rural/country-themed TV shows. Afraid of looking behind the times, all of them – including The Jim Nabors Hour, Petticoat Junction, The Andy Griffith Show, Beverly Hillbillies, Green Acres – were cancelled in one fell swoop.

Hit play for the always interesting history lesson from Matt Baume. You can click over to his Patreon page for bonus videos from LGBTQ TV history.

In March, I covered his very interesting look into whether the 1960s sitcom Bewitched was really gay all along…?