• Instinct Magazine: After Jimmy Kimmel became inquisitive about Jason Momoa’s Hawaiian malo that he’s been seen rocking recently, the action star didn’t pause to strip out of his purple silk suit and show off his ASSets.

• Xtra: A new Tennessee bill proposing a ban on ‘male or female impersonators’ in public could criminalize drag performers and trans people. The legislation would make it a crime to do drag where it “could be viewed by a person who is not an adult.”

• Out: Ryan Murphy publicly mused about bringing his groundbreaking series GLEE back to life either as a reboot or possibly a Broadway musical.

• Broadway World: Wicked choreographer and longtime Bob Fosse acolyte Wayne Cilento will be bringing Fosse’s DANCIN‘ back to Broadway in March 2023. Cilento was one of the original stars of DANCIN‘ in the 1978 Broadway production.

The final week of Bob Fosse's DANCIN' at @TheOldGlobe has arrived!

Catch unbelievable choreography from this stellar ensemble before it's too late! pic.twitter.com/MifA1PxStW

• New York Times: It could take a recount to decide if the controversial Rep. Lauren Boebert (R-CO) will win re-election, and it could take weeks to reach a decision.

• Tucson Sentinel: It’s not official yet, but the venerable Arizona newspaper says its seen enough in the data to project that Sen. Mark Kelly (D-AZ) will win re-election.

• Edge Media: President Joe Biden told reporters this week that he hopes Russian President Vladimir Putin will be more willing to negotiate the release of out WNBA star Brittney Griner now that the U.S. midterm elections are over.

• Twitter: Elon Musk’s idea of selling ‘verified’ check marks to anyone on Twitter with $8 didn’t go so well. Tons of folks started throwing down their money to create fake accounts in the names of famous folks for yuks. These are all from fake accounts that have since been deleted. 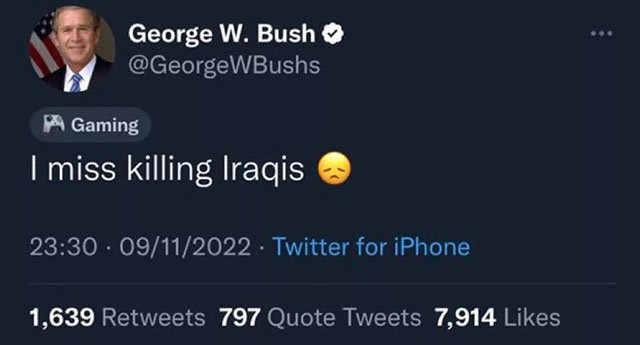