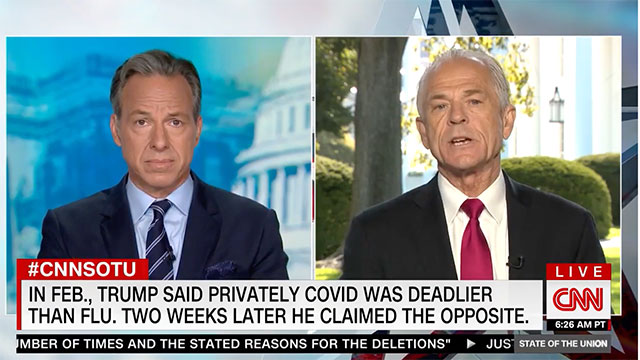 There’s a strategy in public relations.

During a scandal or debacle, send out a representative to do an interview with a news outlet. When asked a question about the scandal, begin spewing the talking points you’ve been told to repeat.

When asked to get back to the question at hand, repeat the talking points to continue killing time out of the 7 or so minutes of the segment.

When the host tries to get back to the question at hand AGAIN, become irate and say, “You’re not letting me answer the question” when you KNOW you’re just running out the clock AND you’re just repeating the scripted talking points without addressing the actual issue.

This is what happens in the clip below between CNN anchor Jake Tapper and White House trade adviser Peter Navarro.

Now, you might wonder why a trade adviser is speaking to the news about the coronavirus pandemic. It has nothing to do with his background, he’s just the kind of pugnacious scrapper that Donald Trump likes to see defend him. That’s why he’s doing the interview. In this appearance, Navarro has an audience of one. His boss.

When Tapper asked Navarro to explain why Trump privately acknowledged the coronavirus was deadlier than the flu but said otherwise publicly, Navarro repeatedly goes down a rabbit hole with his talking points.

At one point, as Navarro throws out the false statement that Trump was “called a xenophobe and a racist by Joe Biden” (he wasn’t) and later apologized for it (he didn’t), Tapper corrects him.

Navarro says, “We’ll do the fact-checker on that.” “I just did,” responds Tapper.