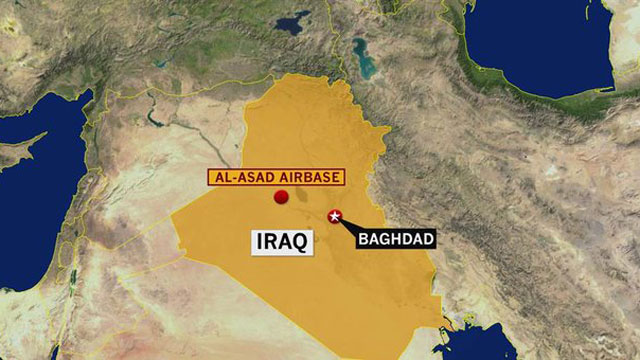 Iran’s Islamic Revolutionary Guard Corps (IRGC) has claimed responsibility for a missile attack on Al Asad airbase in Iraq, where U.S. troops are stationed, according to Iranian state TV.

Why it matters: It’s the first sign of direct retaliation against the U.S. for the killing of Iranian Gen. Qasem Soleimani, following three days of mourning. President Trump visited the airbase in December 2018 and said that the U.S. would keep a presence in Iraq in part to “watch over Iran.”

Islamic Revolutionary Guard Corps: “The brave soldiers of IRGC’s aerospace unit have launched a successful attack with tens of ballistic missiles on Al Assad military base in the name of martyr Gen. Qasem Soleimani. … We warn all allied countries of the U.S. that if attacks are launched from bases in their countries on Iran, they will be a target of military retaliation.”

White House Press Secretary Stephanie Grisham: “We are aware of the reports of attacks on US facilities in Iraq. The President has been briefed and is monitoring the situation closely and consulting with his national security team.”

SPECIAL REPORT: “There are reports tonight that Iran has launched multiple missiles at Iraq’s Al Asad Air Base…This attack is believed to be in retaliation for the U.S. drone strike in Baghdad last week that killed Iran’s top general.” pic.twitter.com/8yAv5vCHgI

On Twitter, an adviser to Iran’s Supreme Leader, in direct response to Donald Trump’s USA flag tweet, shared this: