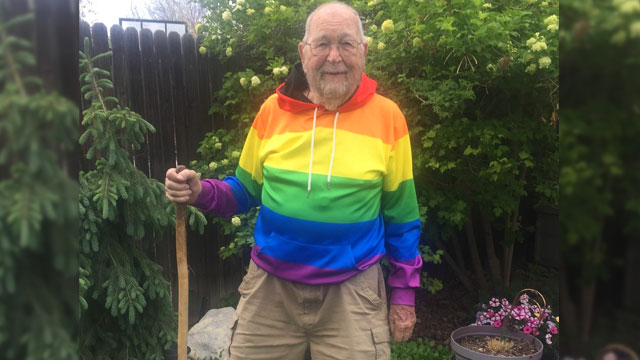 As the saying goes, “It’s never too late.” Just ask 90-year-old Kenneth Felts who just recently came out as gay to his friends and family.

Felts, who lives in Arvada, Colorado, told The Denver Post he never planned on coming out. But after deciding to write his autobiography during the COVID-19 health threat, his trip down memory lane led him to a time when he fell in love with a man named Phillip in the 1950s.

Today, Felts says he realized Phillip was his one true love in life. But he made the choice to live as a heterosexual man because “coming out in the ‘50s, /60s and ‘70s was horrendous.”

“There was no gay community, there really weren’t gay organizations or anything,” recalls Felts. “People who came out came out on their own, without support. And I guess I didn’t have the courage to face society at that time, so I just went ahead and buried it.”

Even though he realized he was gay at the age of 12, Felts says he was always naturally introverted. That, coupled with always being a new kid at school due to his father’s career working for railroads, resulted in being targeted by school bullies.

So he spent his life denying who he truly was.

“I’ve been in the closet all my life — deep in the closet, behind rows and rows of clothing. I’m way back there,” he told the Post. “Opening that door at the front, I had great trepidation as to what people would say. I was very concerned because I needed people and I couldn’t stand the thought of losing them just because I decided to finally be who I really was.”

Along the way, he married a woman and had a daughter named Rebecca. But, ultimately, his marriage ended in divorce.

In a recent conversation with his daughter, who’s openly lesbian, he shared the memory of Phillip and the regret he felt for nearly 60 years.

Even though Rebecca came out to him 20 years ago, it wasn’t until recently that he was able to overcome his own struggles with being gay.

But once he experienced acceptance and support from his daughter and her wife, he went all in and sent messages and emails to friends sharing the news.

“Don’t underestimate your friends and family,” he said. “You might be surprised at how they react if you were to decide to come out. Enjoy what you’ve got while you’ve got it, because you’ve only got it once.”

Enthusiastically embracing his true identity, he recently announced he was taking part in a virtual 5K this past weekend to raise funds for Denver Pride. And he now participates in a virtual LGBTQ senior coffee group complete with a rainbow flag hanging on his wall in the background.

“He just really seemed to take it and run with it,” says his daughter-in-law Tracie Mayes. “He seems to be making up for lost time and really is owning it, which is fantastic.”

“He’s just so brave and he doesn’t even realize that he is, but it’s extraordinary,” adds Rebecca.

Looking back, Felts says he has no regrets about being married to a woman because the union brought him his daughter. He has tried to track down long-lost love Phillip, but to no avail.

Today, he spends his time with Rebecca, Tracie and his two grandchildren as well as gardening and continuing his writing.

Hoping his story might inspire others to embrace their own authentic selves, he told the Post, “It’s never, ever too late to be yourself.”