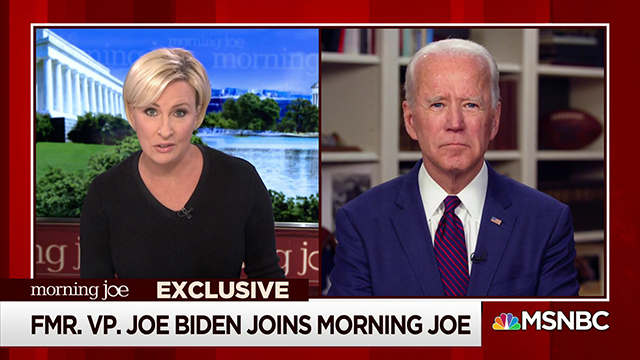 Former Vice President and presumptive Democratic presidential nominee Joe Biden, in a statement from his campaign, explicitly denied accusations that he sexually assaulted a former aide during his time in the Senate.

I want to address allegations by a former staffer that I engaged in misconduct 27 years ago. They aren’t true. This never happened.

While the details of these allegations of sexual harassment and sexual assault are complicated, two things are not complicated.

One is that women deserve to be treated with dignity and respect, and when they step forward they should be heard, not silenced. The second is that their stories should be subject to appropriate inquiry and scrutiny.

Responsible news organizations should examine and evaluate the full and growing record of inconsistencies in her story, which has changed repeatedly in both small and big ways.

Biden echoed his denial on MSNBC’s “Morning Joe” shortly after the statement was released. He also called on the National Archives to release any record of a complaint that the former aide, Tara Reade, says she filed. “If there was ever any such complaint, the record will be there,” said Biden.

In a statement released Friday afternoon, the National Archives said that “any records of Senate personnel complaints from 1993 would have remained under the control of the Senate.”

“Accordingly, inquiries related to these records should be directed to the Senate,” the statement added.

Reade has said that she filed a complaint with a congressional human resources or personnel office but did not remember the exact name. Her complaint dealt only with the alleged harassment, not the alleged assault, she said. The Post could find no record of the complaint, and Reade said she didn’t have a copy.

In an MSNBC interview with host Mika Brzezinski, Biden appeared from his makeshift home television studio in Delaware. It was the first time he faced questions on the allegations in a public setting.

“I don’t remember any type of complaint she may have made,” Biden said in the interview, when asked if he remembered Reade or the complaint. “It was 27 years ago, and I don’t remember. Nor does anyone else that I’m aware of.”

Reade made her initial accusation last year to several news outlets: that Biden had put his hands on her shoulders and neck when she was working in his Senate office and it made her ‘uncomfortable.’ She says that she brought up the incident to senior aides in the office, but when interviewed those aides told the Washington Post that they had no memory of her allegations.

Reade also says she filed a report about the incident, which she’s characterized as changing ‘the trajectory’ of her life, but says she didn’t keep a copy. No one seems to know anything about the alleged report.

Then during a podcast interview last month, her allegations escalated to claiming Biden sexually assaulted her somewhere on Capitol Hill. She said he pushed her up against a wall, moved his hands up under her skirt and penetrated her.

In a detailed examination of her account two weeks ago, the Washington Post wrote that one of her friends confirmed that Reade had told her of an incident shortly after she said it had occurred.

In that same report, the Post wrote that Reade’s brother, Collin Moulton, acknowledged that she had told him in 1993 that Biden had touched her neck and shoulders. But there was no mention of the actual sexual assault – clearly the most important aspect of the alleged incident.

Interestingly, days after the interview, he sent messages via texts adding that he “recalled her telling him that Biden had put his hand under her clothes.'”

At this point in this post, I want to state clearly: I have personally been the target of sexual misconduct in the workplace in the past. Additionally, I was sexually assaulted during a first “date” in the early 1990s.

While Biden has been accused of over-hugging in the past, which has often been attributed to his age and how men acted in the past, he’s since acknowledged times have changed and he plans to be more aware of touching people.

I encourage you to read it in full, but some of the issues he raises are:

• She spoke with a newspaper last year and accused Biden of touching her in a way that made her uncomfortable — but neglected to mention her claim that he forcibly penetrated her with his fingers. She later said she felt uncomfortable with the reporter, but as Stern points out, why would it take a year to find a qualified journalist to tell her story to?

• Biden campaigned and went on to become Vice President of the United States for 8 years, but Reade never said anything during that time.

• In 2017, on multiple occasions, Reade retweeted or “liked” praise for Biden and his work combating sexual assault. It is bizarre that Reade would publicly laud Biden for combating the very thing she would later accuse him of doing to her.

• By January of 2020, though, Reade had become a supporter of Sen. Bernie Sanders and penned an essay on Medium saying the Democratic party was trying to “shove” Biden down Democrats throats. She also wrote approvingly of Russian President Vladimir Putin.

• Speaking of timing, Stern notes that Reade’s allegations didn’t escalate to full-on sexual assault until Biden began to win in the Democratic primaries in March.

There’s much more in Stern’s USA Today op-ed and I encourage you to read it.

On the same day Reade accused Joe Biden of sexual assault in March, she apparently edited her previous statements posted to her Medium account to better match the new allegations. At that link, a journalist has compared and highlighted the numerous additions and deletions made on March 24, 2020.

Why would she alter her original words without mentioning the amendment on her post…on the DAY she accused him of sexual assault?

As I earlier stated, I believe allegations of sexual assault should be taken seriously. But believing ALL accusations blindly doesn’t serve women, the #MeToo movement or truth as a whole.