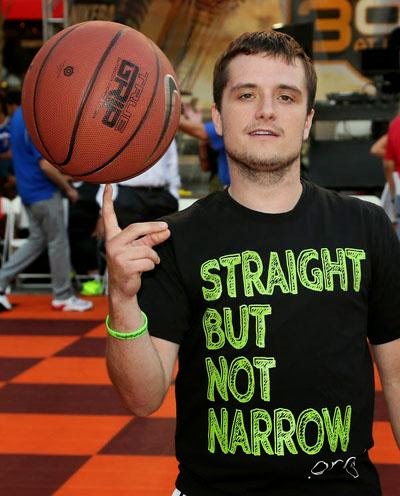 Hunger Games star Josh Hutcherson hosted on Friday the third annual Celebrity Basketball Game Benefiting Straight But Not Narrow. SBNN is an ally organization that prepares and trains young adults on how to become allies of their LGBTQ peers.

At the event, Hutcherson noted not only the progress made in recent years but the ground yet to be covered:

“There’ve been some great stepping stones and we’re moving in the right direction, but [the battle] is definitely not won.  I mean, marriage equality is great, but it doesn’t help a lot of people, especially young people who are in school. They can’t even get married yet. So those are the ones who are dealing with [bullying] and at such a formidable age well.”

Hutcherson also announced a new campaign – Power On – in conjunction with Straight But Not Narrow, The Trevor Project, and human I-T.

Noting that more than half of LGBTQ youth who were not out in person had used the internet to connect with other queer people and like minded individuals, the program will encourage teens to donate their unused laptops, tablets, and smartphones to be refurbished and distributed to LGBTQ resource centers across the United States.

Those interested in donating to the initiative can find instructions at human-i-t.org/ally. The organization will collect and refurbish all donated devices free of charge.