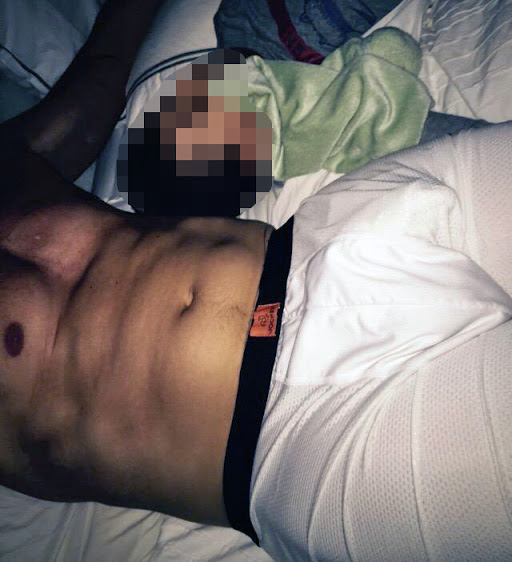 After being caught in a sexting scandal back in 2011, Weiner was forced to resign from Congress.

Some folks never learn nothing.

While his wife, Huma Abedin, travels the country campaigning for Hillary Clinton, the disgraced ex-congressman has been sexting with a busty brunette out West — and even sent her a lurid crotch shot with his toddler son in the picture, The Post has learned.

The stay-at-home cad shot the revealing photo while discussing massage parlors “near my old apartment” shortly after 3 a.m. on July 31, 2015, a screen shot of the exchange shows. Weiner was clearly aroused by his conversation with the 40-something divorcee when he abruptly changed the subject.

“Someone just climbed into my bed,” Weiner wrote. “Really?” she responded. Weiner then hit “send” on the cringe-inducing image, which shows a bulge in his white, Jockey-brand boxer briefs and his son cuddled up to his left, wrapped in a light-green blanket.

The object of Weiner’s affections is his polar opposite politically: a self-avowed supporter of Donald Trump and the National Rifle Association who’s used Twitter to bash both President Obama and Clinton.

The exchanges between Weiner and this woman have apparently been going on since February 2015.

Moments ago, Abedin announced she is separating from Weiner:

“After long and painful consideration and work on my marriage, I have made the decision to separate from my husband. Anthony and I remain devoted to doing what is best for our son, who is the light of our life. During this difficult time, I ask for respect for our privacy.”

As many know, Abedin is a long-time aide to Hillary Clinton. Wait for Donald Trump to politicize this indiscretion for his own gain in 3, 2, 1…