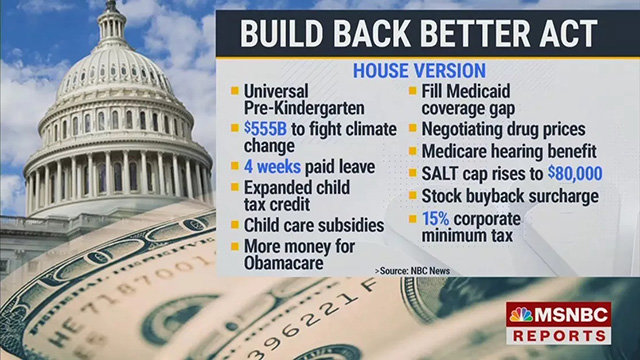 House Democrats finally passed President Biden’s “Build Back Better” agenda on Friday but the legislation now heads to the Senate where it faces an uncertain future.

The $1.75 trillion bill would tackle a host of Democratic priorities on health care, education and climate change. Passage of the legislation would be the largest expansion of the social safety net in the U.S. since the 1960s.

What’s in Build Back Better for health care

Minority Leader Kevin McCarthy (R-Calif.) delayed the vote by giving an overnight 8.5 hour speech. But in the end, his blathering amounted to nothing.

But moving forward, Sens. Joe Manchin (D-W.Va.) and Kyrsten Sinema (D-Ariz.) could have outsized power in diminishing (or killing) the bill.

Manchin has already expressed his disagreement over multiple provisions, including paid leave.

This is a big deal. But the bill now heads to the Senate, where Sen. Joe Manchin is expected to demand his final pound of flesh. He’s made clear he does not support the four weeks of paid family leave nor a number of climate provisions.https://t.co/auqMS25J0J

Only one House Democrat voted against the bill – Maine Rep. Jared Golden. Not one Republican voted in favor of the bill.

A group of moderate House Democrats had been waiting for a fiscal score from the Congressional Budget Office before voting on the bill.

The Congressional Budget Office issued its estimate on Thursday that the bill would add $160 billion to the deficit over 10 years.

But that estimate did not include the $207 billion in additional revenues the office estimates the I.R.S. would ultimately collect from tax cheats.

The Build Back Better Act lowers the costs of prescriptions drugs — so if you’re one of millions of Americans with diabetes, sometimes paying $1,000 a month for insulin — the cost is capped to $35 a month.

The Build Back Better Act improves access to education by providing universal preschool for every 3-and 4-year old in America and increases Pell Grants for working families and apprenticeship programs for education beyond high school.

What’s actually in our historic Build Back Better Act?