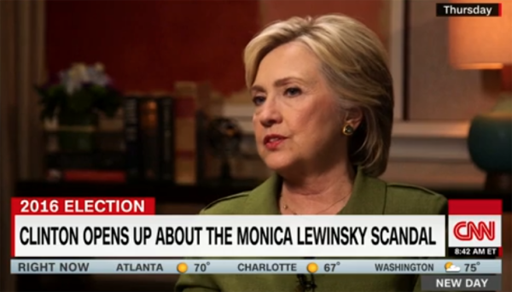 In advance of the coming presidential debates, Hillary Clinton spoke to CNN about how she coped with her husband Bill Clinton’s affair with Monica Lewinsky 20 years ago.

Donald Trump has hinted that he considers the subject “fair game” and won’t pause to somehow blame Hillary for the sins of her husband.

Having been legally married for almost 13 years now, and with my husband Michael for 22 years, I think it’s tawdry to bring up since Hillary wasn’t the one cheating on her spouse.

That said, I will add that both presidential candidates have faced challenges in their marriages. Hillary with Bill’s indiscretions and Trump with his two divorces.

While I believe political spouses should be off-limits, I think it does give the American voter information about how these two candidates handled personal challenges.

Hillary honored her marriage vows and worked through her issues with Bill. Donald, who did cheat on his first wife with his second, cut and run.

I’m willing to bet that Hillary will not be bringing up Donald’s multiple divorces. #WhosTheClassAct