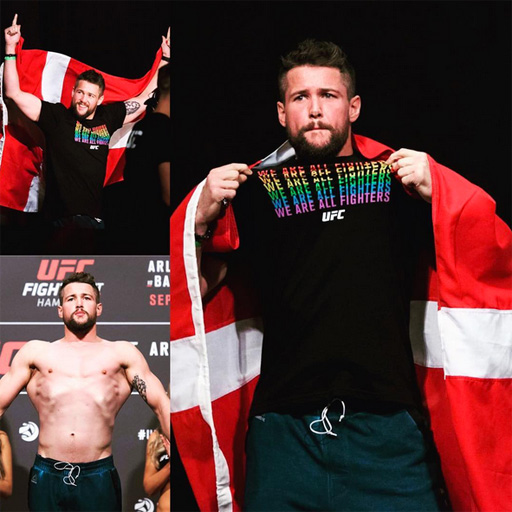 Danish MMA fighter Nicolas Dalby shared on his Instagram a moment of celebration after weigh-ins in advance of his fight with Germany’s Peter Sobota this past weekend.

Weigh-ins for #UFCHamburg done! 170 and ready to smash Sobotta! 😈
But it was more important for me to show my support for the #LGBTQ community ❤️💛💚💙💜. #WeAreAllOne
Pictures by @perhaljestamphoto

Fans quickly praised the inclusive message. Check out just some of the very positive comments:

ric_freeman: I’m thrilled to see this level of support for the LGBT+ community. Thank you, sir!

catwoman279: Thank you for standing up and showing your support! Sign of a true class act! 👍🏻❤️

pikepinemedia: This is a tremendous show of support to my people. Thank you!

marcelom0raes: This is sooo important for us, members of the LGBTQ community! Thanks you so much for this! 🌈

The Gaily Grind has details on the rainbow-colored “We Are All Fighters” t-shirt:

The UFC began selling the rainbow-colored shirts in July with all proceeds going to the LGBTQ Center in Las Vegas.

“Just as it takes courage to step into the Octagon, it takes courage to stand for what you believe in — and we’re proud to stand with members of the LGBTQ community in their fight for equality,” said Ike Lawrence Epstein, UFC Senior Executive Vice President and Chief Operating Officer. “As friends and allies of the LGBTQ community, our hope is to raise awareness and help support community groups like the LGBTQ Center that directly impact LGBTQ individuals.”

Many UFC athletes have worn the shirts in recent weeks.

The “We Are All Fighters” initiative is “designed to make a meaningful impact in communities where UFC events are held by supporting organizations that help people overcome adversity, achieve equality, or provide a public service,” the UFC said in a statement.