One of my favorite web series – Where The Bears Are – is approaching the final week of their crowd-sourcing campaign to help fund the upcoming 4th season of the award-winning series. So, I wanted to give a quick shout-out to my favorite fun and furry Bears.

I’ve been watching the series since the very first episode of Season 1. Described as “The Golden Girls” meets “Murder, She Wrote” but with big, hairy, gay men, the guys at WTBA take the comedy and furry fun furr-ther and furr-ther with each new season.

Here’s a synopsis of what the Bears have in store for Season 4:

Season 4 will thrust Reggie, Wood, Nelson and Todd into yet another thrilling murder mystery surrounding the upcoming nuptials of everyone’s favorite bear couple, Nelson and Todd!

At the same time, Reggie’s true crime TV show becomes a hit on the Inquisitive Channel and sparks begin to fly because of his new co-stars Det. Chad Winters and Captain Coley.

Meanwhile, Wood decides to start his own swimwear line called “Sporting Wood” with sidekick George Ridgemont which provides them the opportunity to audition, dress and photograph hot bear models for a living!

All while Nelson and Todd plan for the wedding of the century which is most sure to go awry! Season 4 will feature the usual parade of hot, sexy, hairy men that fans adore, the hilarious comedy everyone expects from the show, and a nail-biting climax that the show if famous for!

As I mention on The Randy Report often, I love web series. The short episodes (short attention span here), the creative spirit, and the ability to watch whenever you want makes it all fun.

And when you fund a project – and I have many times – you feel a part of the whole community of the show.

So – enough chit-chat. Take a look at the Bears’ Kickstarter video below and, if you feel it, contribute something to Season 4 of Where The Bears Are. 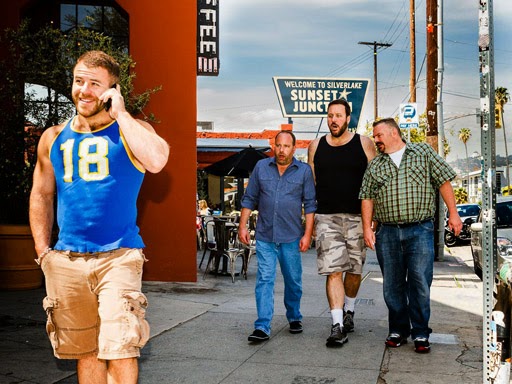