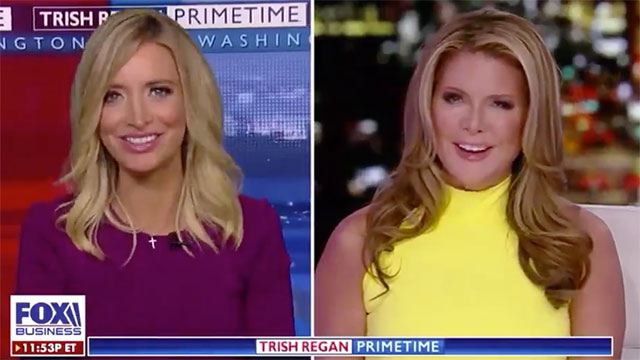 After eight months as White House press secretary, Stephanie Grisham is exiting the post during which she held no regular press briefings traditionally associated with the job.

Trump campaign spokeswoman Kayleigh McEnany will replace Grisham as press secretary, and Grisham will toddle back to First Lady Melania Trump’s staff as chief of staff and spokesperson.

McEnany, a longtime true Trumper, comes with her own baggage to the position.

For instance, she recently insisted Trump would stop the coronavirus before it impacted Americans.

During an appearance in late February with (now-departed) Fox Business host Trish Regan, McEnany said, “This president will always put America first, he will always protect American citizens. We will not see diseases like the coronavirus come here, we will not see terrorism come here.”

She added, “And isn’t that refreshing when contrasting it with the awful presidency of President Obama?”

Since making that statement over 383,000 Americans have tested positive for COVID-19.

On the same day Larry Kudlow said coronavirus was “contained” on Feb. 25th, Trump’s campaign spox made an even more bold claim.

“We will not see diseases like the coronavirus come here..and isn't it refreshing when contrasting it with the awful presidency of President Obama." pic.twitter.com/O0DDH3Rvkw