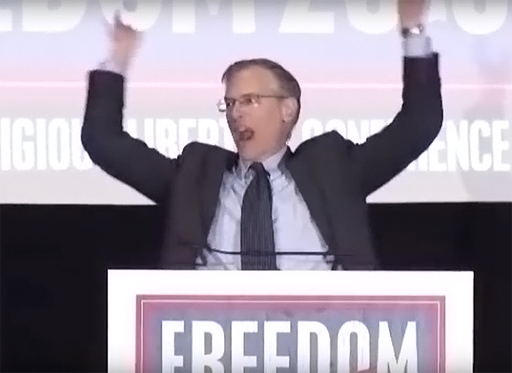 ‘Death to the Gays’ Pastor Kevin Swanson told his ‘Christian’ radio show audience that international pop star Taylor Swift is “a fool” and “God will cut her down” for her support of the LGBTQ community.

Swift’s latest single, “You Need To Calm Down,” is intended as a pro-LGBTQ anthem, and it’s gotten many of the usual haters on the war path.

“Taylor Swift, most popular female singer in America today, released a song promoting the Leviticus 16 list of abominations, pretty much. ‘You Need to Calm Down’ is the name of the song, and she’s apparently telling God to calm down about all of his ethical concerns. I don’t think it’s going to be effective, but that’s what she’s doing.”

Swanson then goes on to spin and twist the message of Swift’s song saying the song is intended to persecute Christians who “don’t want to celebrate homosexual heathen rights and rituals.”

Swanson continues from there telling his listeners that Swift looks down on Christians and thinks they are “poor and dumb.”

“So what do we say to Taylor Swift and her new concoction ‘You Need to Calm Down’? I think we just tell Taylor Swift that she’s a fool. That she doesn’t fear God, and sooner or later, God will cut her down. And may she be broken at the Cross of Jesus Christ and realize she’s a sinner and she’s a sinner in desperate need of a savior, and that’s the message for all of us.”

You can listen to the clip below via Right Wing Watch.

Swanson has a long list of idiotic statements – from calling for the execution of gay folks to announcing the Supreme Court’s Obergefell ruling made it legal to marry your dog.