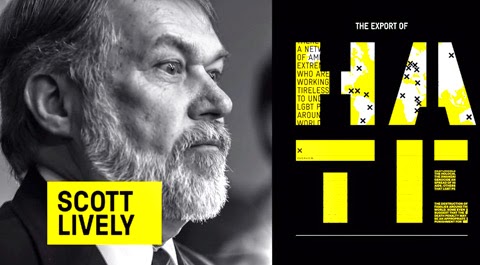 I wrote recently about the Human Rights Campaign’s new program to more fully expose those who work tirelessly to undercut LGBT people around the world. The program is called “The Export of Hate.”

The program lists several virulently anti-gay individuals who campaign not only against our rights, but our very existence. Appropriately, Scott Lively is number one on the list.

Lively, currently on trial for crimes against humanity, is widely credited with advocating for anti-gay laws in Uganda which could send gays and lesbians to prison for life, among many other atrocities.

Well, Lively is not happy being #1 on the Export of Hate list. And as such, he has penned an essay condemning what he calls a “hit list.”

Not every “gay” activist is physically violent, thankfully. Most limit their “human rights advocacy” to harassment, intimidation and slander. But make no mistake, if they thought they could get away will killing every person on the HRC and SPLC hit lists, they would do it. They smolder with malicious hatred against anyone who stands in their way.

So far its been the fear of harm they might do to their whitewashed, house-of-cards, Madison Avenue-created benign public image that stays their hands short of murder… except for a few random nut-jobs like Corkins.

I believe they are now deliberately trying to incite murder against me and every other person on their enemies list. That might have sounded a bit paranoid in years past, but post-Corkins it is just cold hard fact that some “gay” activists are incited to murder by inflammatory leftist rhetoric. The HRC knows that, and yet their rhetoric in this Exporting Hate publication is MORE inflammatory than the SPLC’s rhetoric the drove Corkins over the edge!

I am demanding a retraction and public apology from both HRC and SPLC. To both of them I insist: STOP INCITING HATE BEFORE YOU GET PEOPLE KILLED!!!!!

In addition to his contributions to the Uganda “Kill The Gays” bill, he toured 50 cities in Russia where he is accused of recommending a ban on ‘gay propaganda’.

The guilty dog barks the loudest…