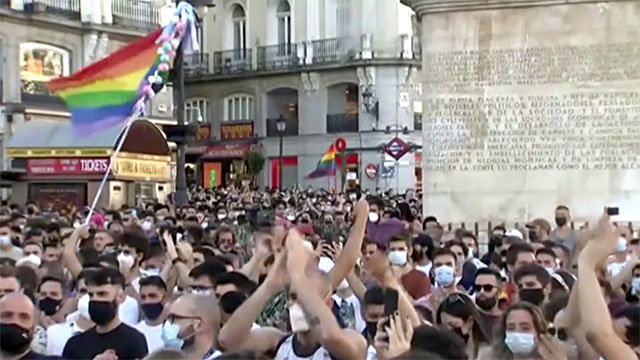 Protests have spread across the globe following the brutal murder of a young gay man in Spain at the hands of an anti-gay mob on July 3.

Samuel Luiz, a 24-year-old nursing assistant, was out with friends in the Galician city of A Coruña in the early hours of Saturday when an argument started outside a nightclub.

His friends told El Mundo that Luiz had stepped out of the club to make a video call when two passersby accused him of trying to film them on his phone. Luiz explained he was talking to a friend by video, but he was allegedly attacked by one of the passersby and left with a badly bruised face.

Five minutes later, the assailant allegedly returned with 12 others who beat Luiz unconscious. He was taken to hospital, where he died later on Saturday morning.

On Saturday 24 year old Samuel Luiz Muniz, was murdered in the Spanish city La Coruna, after being attacked in the street at 3am by a mob of 13 men- it is alleged they brutally beat him whilst they shouted “Fucking F*ggot”💔#JusticiaPorSamuel 🏳️‍🌈pic.twitter.com/J5u16GuWDa


Fifteen people have reportedly given eyewitness accounts of the attack.

Luiz’s friend, Vanessa, who he was video messaging with, was a virtual witness to the assault. “All we could hear were blows,” she told the media.

This evening, Spain’s Policía Nacional announced three people between the ages of 20 and 25 had been arrested as “the alleged perpetrators of the violence assault that ended Samuel Luiz’s life.” The police statement went on to say more arrests could follow.

People took to the streets of Spain’s biggest cities on Monday evening to express their anger at the death of a man in a suspected homophobic attack at the weekend.

Crowds filled a central Madrid square and activists marched down a major street in Barcelona, chanting slogans and waving placards and rainbow-coloured flags.

Interior Ministry data shows 278 hate crimes related to sexual orientation or gender identity were reported in Spain in 2019, an 8.6% increase on the previous year. The European Union Agency for Fundamental Rights warns only a fraction of hate crimes are reported to the police.