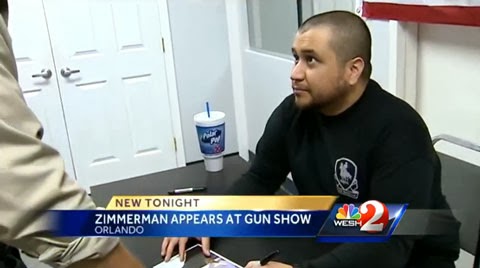 Like a Hollywood celebrity or world class athlete, George Zimmerman attended a Florida gun show to sign autographs and take pictures with “fans.”

His appearance at the New Orlando Gun Show was not without trouble though.

The gun show had to be scaled down, however, after community pressure forced organizers to move to a smaller venue.

“They told us they canceled for community pressure,” said Mike Piwowarski, a show organizer. “They were getting phone calls and backlash, and didn’t want that kind of person there.”

Piwowarski said he was angry the Majestic canceled the event and he plans to sue for an estimated $300,000 in lost gun sales.

He said he supported Zimmerman during his trial in the shooting death of Trayvon Martin and after he was acquitted.

There’s so much wrong about this it’s hard to know where to start. The day an admitted killer of a teenager sits down to sign autographs like someone’s hero is a dark day in America.