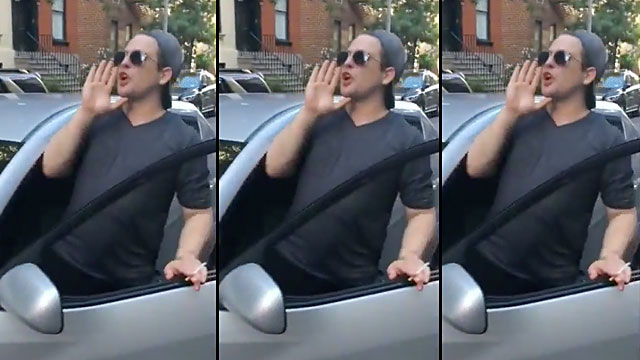 Here’s a sad example that there’s a jerk in just about every demographic.

A video shared on social media shows a confrontation between a driver and a pedestrian escalate to violence after the driver realized he was captured on video calling a Black sanitation worker a “f*cking n****r.”

The incident took place on New York City’s Upper East Side over the weekend. After shouting the racist slur, the driver noticed a pedestrian was recording the ugliness.

“Are you recording me?” asked the driver.

In a pretty spot-on assessment, the pedestrian replied, “Because you’re an asshole.”

“I’m an asshole? Honey, look in the mirror, okay? The only person who is an asshole is you for recording,” says the racist driver.

During the exchange, the motorist asked the pedestrian, “Are you gay, too?”

“No,” the pedestrian replies.

“No, you’re not? Well, you look like it,” the driver snaps back.

When the pedestrian shares he plans on uploading the video to the internet, the driver scoffs, “Okay, I’ll get fans, honey. That’s what I’ll do.”

It’s at that point the driver exits his car and assaults the pedestrian. Along the way snatches the phone recording the incident and hurls it to the ground.

The driver probably thought he’d solved his internet problem, except others nearby noticed the exchange and were recording as well.

The YouTube poster writes that prior to the beginning of the clip, the driver “was repeatedly shouting at a Black sanitation worker, yelling “you’re a n*****”. The noise was enough for several residents to come down to street level.”

Folks in the Twitterverse were NOT having the hideous behavior.

Racist on the Upper East Side. Find out who this racist person is and let us hold them accountable. This and any other act of racism will NOT be tolerated.

As City Council Member of #District45, I will be holding these racists accountable.https://t.co/41nCXEP0Fq pic.twitter.com/ariaOSFGF4

As a gay we don’t claim him

Remind NYC gays that all of the rights they take for granted are thanks to black Lgbtq civil rights leaders of stonewall, and the gay community’s modern rights are because of the civil rights work of blacks in the 50’s and 60’s. This guy should have more respect.

It’s horrifying. This person grows up somewhere else, as a racist, and at some point decides that they want to go live (uninvited) in NYC. Then comes to NYC so he can shout N$%^*R at black New Yorkers whom were probably born there.#GoHome #BlackLivesMatter #GoHomeRacist

Another Trumpster who knows the party is OVER as he loses in Nov.

Another Karen is on the loose and this one is one of the worst! He was angry because HE WAS CAUGHT out on his racist bs thus he tries to destroy the evidence. Pathetic!