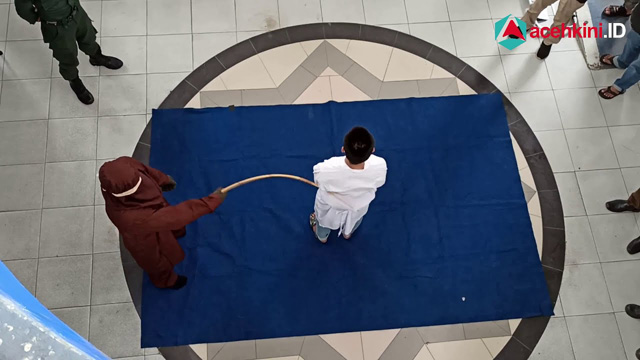 Two men, aged 27 and 29, were publicly caned 77 times each in Indonesia on Thursday after being reported to the authorities for having consensual sex.

The public flogging, held in a public park in Indonesia’s Aceh province, was attended by dozens of people. Public whippings usually attract hundreds of viewers but the crowd was kept small due to the ongoing coronavirus pandemic.

In 2015, Aceh became the only province in Indonesia to adopt religious-based Shariah law. Today marked the third time caning has been used as punishment for homosexuality.

According to the Associated Press, the two men were whipped with a rattan cane by a team of five ‘enforcers’ wearing hoods and robes. The enforcers rotated every 40 strokes in delivering the punishment while the men winced in pain.

Neighbors of the men became suspicious of their relationship and broke into their home in November as the two were reportedly having sex.

A Shariah court ordered the men to receive 80 strokes each but the punishment was reduced as a concession for time spent in prison.

Shariah law allows caning as punishment for ‘moral offenses’ which include drinking, gambling, adultery, men who miss Friday prayers, women who wear suggestive clothing, and those who engage in gay sex. The maximum penalty is 100 lashes.

In addition to the two men, four others received 17 lashes for having extra-marital affairs and 40 strokes for drinking alcohol.

Indonesia has long been a difficult country for LGBTQ people. While Aceh is the only region where homosexuality is explicitly outlawed, authorities have continued to crackdown on the LGBTQ community in recent years.

In 2016, the Indonesian Broadcasting Commission banned men from appearing ‘effeminate’ or dressing in drag.

In February 2018, police raided 5 hair salons, forced 12 trans women to strip and cut off their hair in public before arresting them.

In July 2018, the first public caning of gay men took place in Aceh before a crowd of over 1,000 residents. The mob cheered and shouted insults at the two men aged 20 and 23 as they received 85 lashes each.

That same month police arrested 141 men in a raid on a sauna.

And in November 2018, police conducted a beach raid in an effort to ‘provide safety and maintain public order.’ Three transgender women were arrested and hosed down with a fire truck in public to underscore the humiliation.