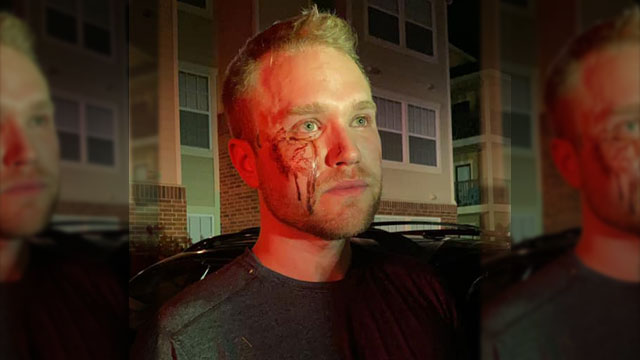 Two people who allegedly beat a gay Oklahoma man unconscious are not expected to face hate crime charges despite the victim and a witness telling police officers the assailants hurled anti-gay slurs during the assault.

Oklahoma City-based real estate agent Christian Council, 28, told police he was returning home in his car in the early hours of June 27 with a friend, 26-year-old Andrew Martinez, when he came upon a pickup truck parked in the street blocking traffic in his apartment complex.

Council says he honked once then again before the truck finally moved out of the way at which point Council parked his car several spaces down.

As he and Martinez exited the car, two men and a woman were standing nearby. The woman, later identified as Amery Dickerson, 23, called Council and Martinez “c**ksuckers” and one of the men used another homophobic slur.

According to the police report, when Council explained he honked his horn because he couldn’t get by, Dickerson charged at him, shoving him into a parked car. As she charged him a second time, he pushed her in the face to protect himself.

Council says at that point the two men yelled, “You f*ggot, don’t you know you can’t hit a girl?’”

“And the driver of the truck and the girl’s boyfriend beat me,” adds Council. “Beat me unconscious.”

Bennett Stone, 24, was identified as the man who started the fight. As the incident escalated, Council and Martinez say the trio was yelling homophobic slurs. Martinez tried to intercede but the unidentified man restrained him while Stone continued the beating.

Martinez told police Council lost consciousness for “a minute or two” as he stopped responding to the blows and his body went limp. Martinez was eventually able to call 911.

The police charged Dickerson and Stone with misdemeanor assault and battery which could result in up to 90 days in jail and a fine of $1,000. Council was treated for a concussion as well as cuts and bruises at a local emergency room.

In the weeks since the attack, Council says he’s experienced post-traumatic stress disorder while in public.

According to The Oklahoman, the initial police report didn’t mention any of the homophobic slurs used during the assault even though Council and Martinez relayed that to the officers.

In characterizing certain crimes, Oklahoma City police can indicate whether an incident was domestic violence, a drive-by shooting, or a hate crime. The officers didn’t check the hate crime box.

The report was later amended to include the use of anti-gay remarks after the police reviewed body camera footage showing Council mentioning the slurs.

In Stone’s version of the events, he claims he saw Council “punch” Dickerson and he was merely defending Dickerson.

A spokesman for the Oklahoma City police, Master Sgt. Gary Knight told The Oklahoman the incident is currently under review before referring it to the Oklahoma County District Attorney’s office.

Council, however, disagrees saying the incident escalated because Stone and Dickerson realized he was gay.

“I want to make this very clear,” said Council to The Oklahoman. “They got out of their truck because they were mad that I honked at them. They beat me unconscious because I was gay.”

Council is aware LGBTQ people aren’t a protected class in Oklahoma meaning Stone and Dickerson won’t be facing state hate crime charges. Still, he says he has filed a hate crime report with the FBI.

Council also says he’d prefer that Dickerson and Stone be sentenced to some form of restorative justice.

“These people can go and sit in a jail cell and just let their hate against queer-trans people build, or they can be forced to go work community service hours alongside the queer and trans community and see the humanity in us, and I think that that kind of restorative justice will do a lot more for our community than jail time will,” Council told The Oklahoman.

A GoFundMe campaign has been launched to help Council cope with the cost of medical treatment in the ER and downtime from work as well as legal fees as Council is planning a civil suit against his attackers.