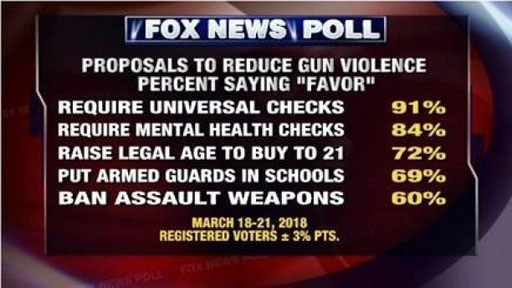 A new survey by Fox News finds – by a wide 13-point margin – voters place a higher priority on protecting citizens from gun violence than protecting the rights of gun owners with 53% support and 40% opposing.

So,  a poll that “leans conservative” finds 91% support FOR background checks on all gun buyers – why wouldn’t lawmakers at the very least do that?

Oh, right. The NRA will take their money from their congressional pawns if that happens.

Now, how does Donald Trump spin this as “fake news” since it’s a poll done by his favorite TV network?