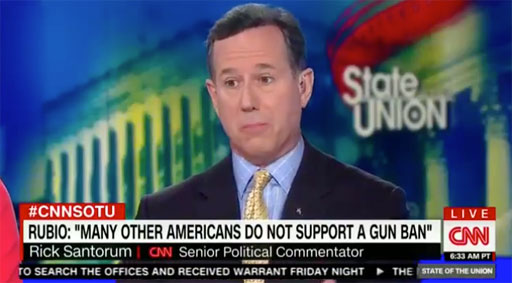 Eternal douche nozzle Rick Santorum told a panel on CNN today that kids are “looking to someone else to solve their problem” when they should be taking individual action like “taking CPR classes.”

It’s worth noting that, while CPR is useful for heart stoppage, the shooting victim of an AR-15 with multiple holes ripped through their body would probably lose even more blood faster if someone started pumping on their heart.

In late February, during another panel discussion on CNN Santorum pointed to “broken homes without dads” as being something that is “common in these shootings.”

Host Jake Tapper pointed out a flaw in Santorum’s theory, as far as the Parkland shooting was concerned. “His dad had died,” Tapper told Santorum. “It wasn’t a ‘broken home.’”

It’s so strange to me that conservatives, who used to champion rising up and taking a stand, all seem so opposed to these students raising their voices.

Rick ‘ Christian Values’ Santorum complaining that kids who survive school shootings are asking ‘someone else’ to change the law. They should learn CPR instead. pic.twitter.com/tr555JoUEf

As a surgeon, I’ve operated on gunshot victims who’ve had bullets tear through their intestines, cut through their spinal cord, and pulverize their kidneys and liver. Rick Santorum telling kids to shut up and take CPR classes is simply unconscionable.

As a Trauma Surgeon & survivor of gun violence, it is critical to clear up the false perception set by @RickSantorum.

Victims that go into cardiac arrest after #GunViolence are Bleeding to Death. CPR is NOT effective in this situation. @DocsDemand @shannonrwatts @MomsDemand pic.twitter.com/VaiTx89zwA

Dear Rick Santorum: CPR is good for heart stoppage. Not good for victims of multiple AR-15 bullets, which typically impart 3 times the lethal energy upon impact than a 9mm handgun bullet. AR-15 bullets obliterate organs and cause so much bleeding that victims die very quickly. https://t.co/5E0HBUFT9b

Gay soldiers cause problems because showers

Gay marriage will lead to bestiality

Abortions to save the life of a woman are “phony”

WHY IS THIS MAN A PAID CONTRIBUTOR TO @CNN?

Rick Santorum says that instead of protesting we should learn CPR. As a kid who loves the medical field, I know that CPR won’t work. To save a GSW victim you need surgical techniques that are beyond even most physicians and are basically impossible to do outside of hospital.

As a healthcare professional who is certified in CPR, I can confirm that performing CPR can’t remove AR-15 bullets from a body. Get a clue.