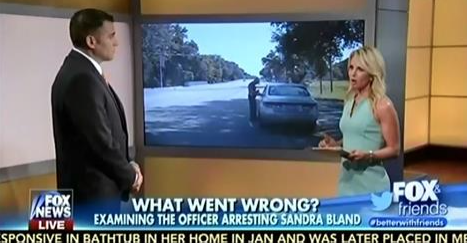 I kid you not. Hasselbeck actually said this in all seriousness. This is not The Onion.

Rafferty said that Trooper Brian Encinia was placed on administrative duty by his department. They acknowledged that the officer stepped over the line in his violent arrest of Bland, who had merely changed lanes without using a signal.

“It appears, looking at this, because she didn’t put out the cigarette next thing he knows, he’s asking the person to step out of the vehicle,” Rafferty said about Encinia. “You can’t take it personal. It’s the job.”

“But, what if, I mean, there are times, I’m sure, someone has, in the history of this land, used a cigarette against a police officer,” said Hasselbeck, “maybe chucked it at him, pushed it at him.”