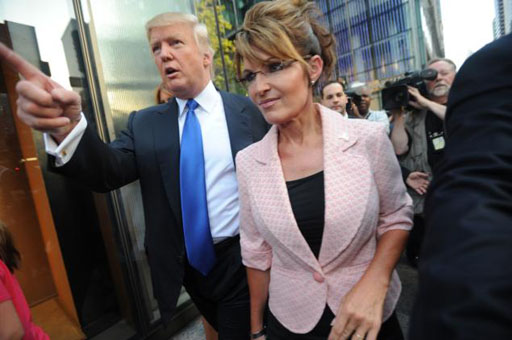 Appearing on The Palin Update (yes, there is such a “show”), Donald Trump lauded the former half-term governor of Alaska for being “tough” and “smart.”

This is really all you need to know about a fictitious Trump administration, via Right Wing Watch:

Host Kevin Scholla asked the GOP presidential candidate, “If there is a Trump administration, could you see picking up the phone, giving the governor a call and picking her brain on some things, or perhaps having her along in some official capacity.”

“I’d love that,” Trump replied. “Because she really is somebody who knows what’s happening and she’s a special person, she’s really a special person and I think people know that.”

“Everybody loves her,” he added. Trump went on to say that unlike the former half-term Alaska governor, his current Republican rivals are “weak” and “ineffective” leaders “to a degree that’s actually almost hard to believe.”

Voters, Trump explained, “like the Sarah Palin kind of strength, you just don’t see very much of it anymore.”

I will agree Trump hits it on the head when he describes Palin as a “special” person.

Trump has criticized “quitters’ in the past, so I’m not sure how her resignation after only two years in office as governor of Alaska sits with the Donald.