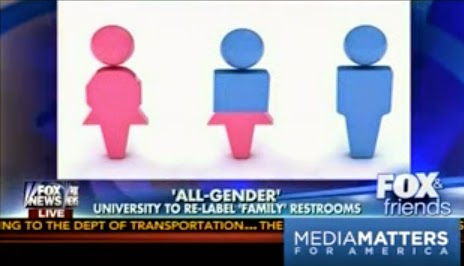 Illinois State University recently announced that it would be relabeling several of its single-stall “family” restrooms on campus as “all-gender” restrooms. Though the decision won’t alter the functionality of any of the restrooms, the move is meant to accommodate transgender and gender-variant students, who often face harassment and violence in public restrooms. All-gender restrooms will be identified by a new sign that “will include a symbol of a half of a man and half of a woman.”

Fox & Friends has mocked the university’s decision on more than one occasion. Co-host Steve Doocy took a mock-up of an “all-gender” sign and asked a group of “Fox fans” outside the studio what they thought the sign meant.

But none of the fans, including a young boy, seemed to share Doocy’s confusion or outrage over the sign.  The exchange was an awkward “fail” for Doocy, who was clearly looking for more “outrage” from the “Fox fans.”

Inside the studio, Doocy’s co-hosts seemed equally surprised at the “Fox fans” flat reaction. Brian Kilmeade admitted “they’re better people than us. I could not figure it out and we had the story in front of us. It makes no sense.”

Mind you, Kilmeade has never been the sharpest tool in the shed.  The hosts also show confusion over the idea of pink being used to designate “female” and blue for “male.”  At their ages, you’d think they would have caught on to the universal practice by now.

Gender-neutral bathrooms are not an unusual practice. Many colleges and universities have adopted gender-neutral facilities in order to better accommodate the demands of growing LGBT and student family populations.

While the long-time practice might confuse the Fox & Friends folks, in the outside world, even the show’s fans can’t see what the issue is.

Check the clip below, especially the very awkward ending of the segment.