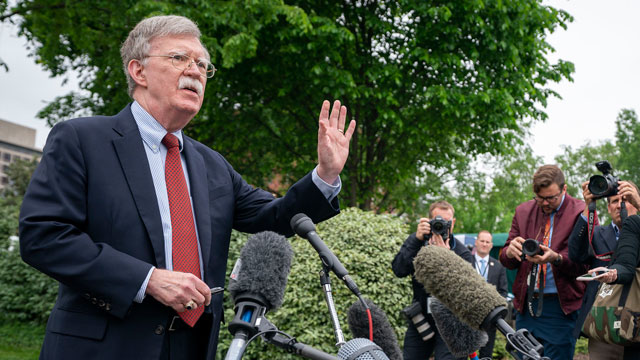 Former National Security Adviser John Bolton has issued a statement saying he will testify during the impeachment trial of Donald Trump if subpoenaed by the Senate.

During the present impeachment controversy, I have tried to meet my obligations both as a citizen and as former National Security Advisor. My colleague, Dr. Charles Kupperman, faced with a House committee subpoena on the one hand, and a Presidential directive not to testify on the other, sought final resolution of this Constitutional conflict from the Federal judiciary. After my counsel informed the House committee that I too would seek judicial resolution of these Constitutional issues, the committee chose not to subpoena me. Nevertheless, I publicly resolved to be guided by the outcome of Dr. Kupperman’s case.

But both the President and the House of Representatives opposed his effort on jurisdictional grounds, and each other on the merits. The House committee went so far as to withdraw its subpoena to Dr. Kupperman in a deliberate attempt to moot the case and deprive the court of jurisdiction. Judge Richard Leon, in a carefully reasoned opinion on December 30, held Dr. Kupperman’s case to be moot, and therefore did not reach the separation-of-powers issues.

Accordingly, since my testimony is once again at issue, I have had to resolve the serious competing issues as best I could, based on careful consideration and study. I have concluded that, if the Senate issues a subpoena for my testimony, I am prepared to testify.

ABC News reports Bolton informed Senate Majority Leader Mitch McConnell of his statement before it was released, but did not tell the White House.

While publicly saying he wants to see witnesses testify at the Senate trial, Trump has repeatedly blocked White House officials from doing so.

McConnell has said he doesn’t see the need for witnesses or documentary evidence during Trump’s trial.

CNN’s Manu Raju reports that with this new development, Democrats say Speaker of the House Nancy Pelosi’s decision to withhold the articles of impeachment until now has been vindicated.

In light of Bolton willingness to testify, Dems argue that Pelosi strategy to withhold articles has been vindicated. “We would not have this development absent the Speaker’s hold,” a senior Democratic aide said. “Another proof point that indicates the value of her strategy.”

Sen. Schumer responds to John Bolton announcing he will testify if subpoenaed: "If any Senate Republican opposes issuing subpoenas to the four witnesses and documents we have requested they would make absolutely clear they are participating in a cover up." https://t.co/MgSh5omGtf pic.twitter.com/5lbrU6ZbPR