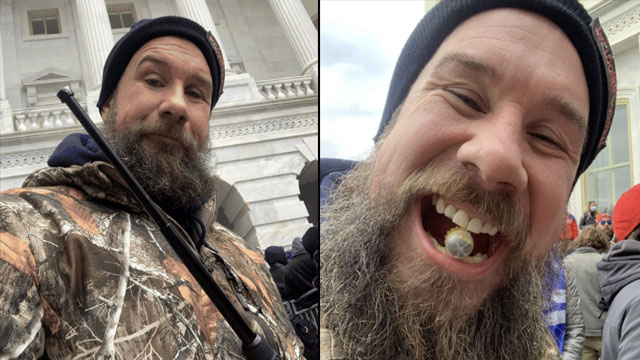 Scott Fairlamb, a New Jersey gym owner and former MMA fighter who violently attacked a police officer during the January 6 Capitol invasion, was sentenced to 41 months in prison on Wednesday.

Former MMA fighter Scott Fairlamb becomes the first US Capitol rioter to be sentenced for January 6 violence against police, getting 41 months in prisonhttps://t.co/aqY7ZRtRDY

Scott Fairlamb pleaded guilty in August to assaulting a police officer and obstructing an official proceeding. He has been in jail since he was arrested in late January and will get credit for the time he has already spent behind bars.

Fairlamb’s sentence will likely set an early benchmark for how harshly rioters charged with violence may be punished, and it ushers in a new phase of the US Capitol riot cases, which so far have had only nonviolent defendants sentenced largely to no jail time.

“I truly regret my actions that day. I have nothing but remorse,” Fairlamb said in court Wednesday with tears in his eyes as he asked the judge for “mercy.”

In addition to the 41 month prison sentence, Fairlamb will also have 36 months of supervised released and have to pay a $2,000 fine for damage done to the Capitol building.

During sentencing, Judge Royce Lamberth told Fairlamb he had made the right decision in accepting a plea agreement adding, “Had you gone to trial, I don’t think there’s any jury that could have acquitted you.”

Scott Fairlamb yelled at MPD officers trying to reinforce Capitol Police: “Are you an American!?” He then punched one officer in the head as he was trying to push through the crowd. Video below: https://t.co/ZZijvNLcbX

🚨 SENTENCING: U.S. District Judge Royce C. Lamberth sentences Scott Fairlamb, of New Jersey, to 41 months in prison for obstruction and assaulting police during the #CapitolRiot, to be followed by 36 months of supervised release. @wusa9 @EricFlackTV pic.twitter.com/CzUpjLVeVr