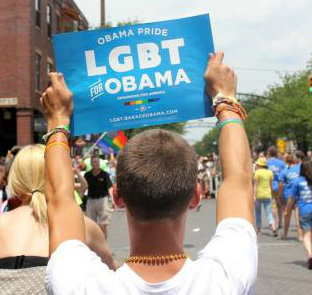 “The most sweepingly positive changes any president has ever made to address gay rights. How can we not vote for that? I may not have a job yet, but I have my dignity! OBAMA 2012”

I was reading on some of my favorite blogs and saw this comment on JoeMyGod. It was posted as a guest, but I wish I could attribute it to the author.

That sentiment resonates to my core.

While the terrible economy continues to slowly improve – in spite of the GOP obstruction in Congress to keep things from improving so President Obama might not be re-elected – I have to say the statement above says a lot about why and who supports President Obama.

No President has done more for lifitng the level of respect for LGBT Americans than President Barack Obama.

From repealing DADT (which he said he would do, and he did) to refusing to defend the unconstitutional Defense of Marriage Act, to supporting marriage equality for all Americans – NO President has done more to help us feel equal.

The conservative gays at GOProud love to rally ’round the GOP saying gays rights aren’t the only issue and “economic issues affect us all.” Yes – economics affect us all, but before you make money, have a job, raise children or even just get up in the morning we all need to feel our worth. Our dignity.

I’m not in campaign mode here, but Mitt Romney does not see some Americans as being as equal as others. He has said he would support a constitutional amendment banning marriage equality for millions of gay Americans. He did not support the repeal of Don’t Ask, Don’t Tell. Thousands of American men and women, who put their lives on the line for our country every day,  that Mitt Romney does not feel should be able to serve their country.

Jobs are slowly coming back after the worst economic downturn since the Great Depression. There’s a saying: “you walk seven miles into the forest, it’s seven miles back out.” It took eight years of bad decisions on behalf of the last administration to get us into the mess Obama inherited.  The worst recession in 80 years isn’t going to be resolved in three.

President Obama is doing his best despite a Republican party that stated that their number one goal was not to create jobs for Americans; it was to deny President Obama a second term. And it’s clear that’s what their focus has been on.

America’s future continues to improve. We are still the great country we always have been. AND the LGBT community has many reasons to support a President who sees us as equals. Who treats us with dignity.

I’m pretty sure that falls under the definition of the word “pride.”