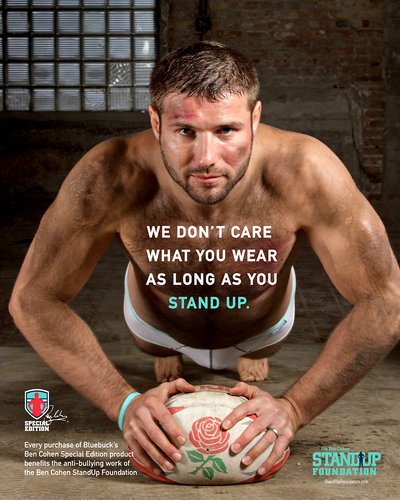 Fabulous for so many reasons.

Ben Cohen is featured today in the New York Times:

When the noted British athlete Ben Cohen — the David Beckham of rugby — walked down the runway this month for an AmFAR benefit at the New York Public Library, odds were that many in this audience thought he was just another handsome, muscular model. With his easy smile, buzz cut and 6-foot-3 frame, Mr. Cohen fit the mold and the clothes.

One of the highest-scoring players in British Union rugby history, Mr. Cohen, 33, was being honored that night. Taking the microphone, Mr. Cohen explained to the crowd that instead of signing a three-year contract, he quit rugby last year to devote himself full-time to battling homophobia.

In 2011, he started the Ben Cohen StandUp Foundation to combat bullying, especially the bullying of children who might be lesbian, gay, bisexual or transgender — an issue that has received heightened attention in the last two years after the suicides of several gay teenagers who had been bullied by peers.

And btw – you may have noticed he’s very, very good looking 🙂

Make sure you visit the StandUp Foundation, which he founded, to see what you can do to help Ben Cohen end bullying.