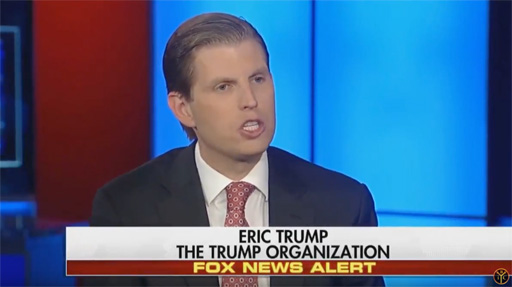 That must make for interesting chit chat at the dinner table in the Conway home.

That said, Eric Trump, in another attempt to prove his less-than-stellar intellect, criticized George on Twitter calling out what he perceives as “disrespecting” Kellyanne’s place of employment.

The code Conway cites is in regard to laws prohibiting witness tampering. Under 18 USC 1512(b) it is illegal to “cause or induce any person to withhold testimony.”

That seemed to have triggered young Eric:

Of all the ugliness in politics, the utter disrespect George Conway shows toward his wife, her career, place of work, and everything she has fought SO hard to achieve, might top them all. @KellyannePolls is great person and frankly his actions are horrible.

Folks had a little something to say about that. Not only did Twitter users clap back at Eric, but Conway retweeted the shade.

Of all the ugliness in politics, the utter disrespect the Trumps show toward the rule of law, the presidency and its place of work, and everything this nation has fought SO hard to achieve might top them all. Donald Trump is terrible person and frankly his actions are horrible. https://t.co/fEtH3MLcyN

How does noting that your father engaged in witness tampering today disrespect Kellyanne Conway? https://t.co/kvwvVB4hcp