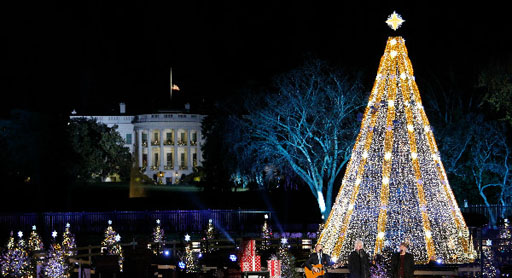 Speaking to right-winger James Robison earlier this week, Eric Trump explained several of the “reasons” why his dad is running for president.

Along the way, Eric erroneously says that the National Christmas Tree has been renamed “Holiday Tree.”

“He opens up the paper each morning and sees our nation’s leaders giving a hundred billion dollars to Iran, or he opens the paper and some new school district has just eliminated the ability for its students to say the pledge of allegiance, or some fire department in some town is ordered by the mayor to no longer fly the American flag on the back of a fire truck,” Trump told James Robison in an interview posted this week.

Eric also says he thinks his dad should get extra credit for running since he really “does not need the job.”

Reading through the interview, you can’t help but notice Eric really likes the phrase, “There’s no question…” He uses it over and over again in the span of a few minutes.

What is it about Trump’s and their love affair with absolutes?