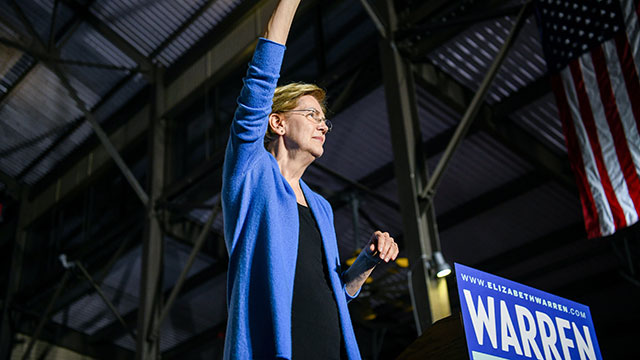 Senator Elizabeth Warren of Massachusetts dropped out of the presidential race on Thursday, ending a run defined by an avalanche of policy plans that aimed to pull the Democratic Party to the left and appealed to enough voters to make her briefly a front-runner last fall.

Though her vision excited progressives, it did not generate enough excitement among the party’s working-class and diverse base, and her support had eroded by Super Tuesday. In her final weeks as a candidate she effectively drove former Mayor Michael R. Bloomberg of New York, a centrist billionaire, out of the race with debate performances that flashed her evident skills and political potential.

Addressing supporters and the press in front of her house in Cambridge, Ms. Warren said that, from the start, she had been told there were only two true lanes in the 2020 contest: a liberal one dominated by Mr. Sanders, 78, and a moderate one led by Mr. Biden, 77.

“I thought that wasn’t right,” Ms. Warren said, “But evidently I was wrong.”

When asked if she would be making an endorsement in the Democratic race, she demurred.

“Not today, not today. I need some space around this, and want to take a little time to think a little more.”

Remarks from @ewarren as she announces she is exiting the 2020 race for the Democratic presidential nomination https://t.co/s7sef9dFn5

Senator @ewarren has made fighting on behalf of working families her life's work. Meeting urgency with moral courage, she’s the kind of leader Americans are fortunate to have, and I’m honored to have run alongside her.

.@ewarren is a fierce advocate for justice who has put LGBTQ equality front & center in her campaign. Forever grateful for her allyship, her advocacy, and her leadership. https://t.co/IeVBcHex46