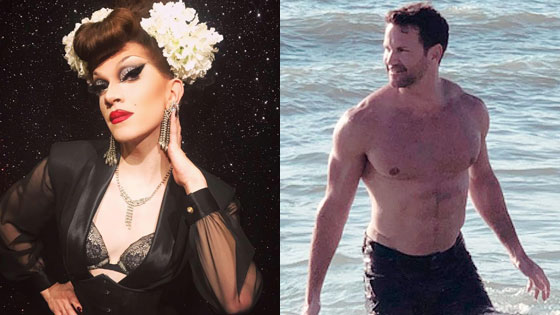 For months now, the LGBTQ media has reported on totally-not-gay former Congressman Aaron Schock as he’s turned up in photos and video clips making out with gay men at Coachella, tipping go-go dancers at gay clubs in Mexico and posing on the beach with gay social media mavens.

The interest in Mr. Schock is borne out of the fact that while in office he openly opposed LGBTQ rights. His public positions and anti-gay votes included supporting a  constitutional ban on same-sex marriage and voting against the repeal of Don’t Ask Don’t Tell.

He has never apologized or addressed his reasons for such policy positions while continually denying he is gay. He’s never publicly come out.

His most recent foray into LGBTQ social life was a visit to the popular West Hollywood bar Revolver when he attended a karaoke night hosted by local drag queen Jonnie Reinhart.

When word got back to Reinhart that Schock was in the audience, Reinhart felt a responsibility to do or say something.

Well friends- I spoke to one Aaron Schock tonight. I’ll be making a video and sharing some of what we discussed. Thanks @ira for the paparazzi shot pic.twitter.com/fsXG93TgHt

In a video post to his Facebook page, Reinhart admits that he’s not “a confrontational person,” but in light of Schock’s well-documented hypocrisy, couldn’t shake a sense of obligation to address Schock.

In his video, Reinhart says he knows there are folks who would have loved to have seen Schock thrown out of the bar or had a drink thrown in his face.

“My job is to literally make people feel comfortable and in comes this situation, where clearly other people were aware he was there,” Reinhart recently told Insider.com. “There was a general elephant in the room.”

Instead of calling Schock out on the microphone, Reinhart decided to perform “F*ck You” by Lily Allen. As the song began, Reinhart told the crowd, “This song goes out to someone in the audience. And it goes out to anybody who votes against gay rights.”

Reinhart figured that would send a subtle message, and expected Schock to leave.

But after the song, a friend of Schock’s approached Reinhart to chat, which inspired the drag queen to speak to the former congressman directly.

Like many, Reinhart believes Schock still owes the LGBTQ community a public apology for his anti-gay positions.

“Keep in mind, my blood was boiling, my heart was pounding,” shares Reinhart in his video. “So I went up and shook his hand and I explained to him why I was upset that he was there, why other people were upset that he was there, and I basically told him that he wasn’t going to be welcomed in gay spaces until he began the process of apologizing and healing the harm that his actions have caused.”

According to Reinhart, Schock listened and expressed appreciation for addressing him directly.

Addressing his political record, Schock apparently told Reinhart “that he did not identify as gay at that time, and it wasn’t until years later that he began to explore and understand his sexuality.”

Then, Schock shared with Reinhart “his experience of being publicly outed” and how his family had reacted to the news of him being gay.

“Basically, he told me his family’s reaction was not positive, it was very bad,” shares Reinhart. “And he insisted that he wasn’t looking for sympathy, and he said that he was working on putting out a statement.”

Reinhart didn’t go into Schock’s personal details that were shared in the conversation that night since “he’s actually no longer a public official.”

Schock apparently asked about Reinhart’s own coming out experience and the drag performer shared that he was publicly outed when he was 13, so he grasps how difficult it is to be outed. But, says Reinhart, “It doesn’t excuse his [Schock’s] behavior.”

“I told him that he can’t have his cake and eat it too, and I told him that I’ll be waiting for his statement,” added Reinhart. “He told me that he hoped that he could talk to me again, we shook hands, and that was that.”

Reinhart concludes by telling the viewer his goal in the conversation was to “extend an olive branch,” adding “I believe you can have a respectful conversation with somebody while still telling them that they have f*cked up and they need to do better.”

While I find Reinhart’s civility in his encounter with Schock admirable, it’s worth noting that Schock has now been out and about with his openly gay forays for several months.

If he’s planning to address his anti-LGBTQ past, how long does it take to pen a statement?

As I have previously reported, Schock left office in public disgrace in 2015 amid corruption charges including mail fraud, filing false tax returns, theft of government funds, and more.

In March, he was offered and accepted a sweetheart deal by federal prosecutors who agreed to drop all charges if he repaid $68k to his campaign fund and $42k to the IRS.