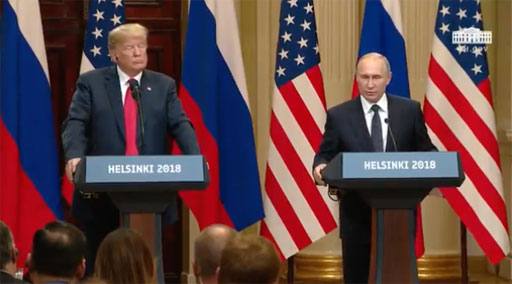 Absolutely stunning display of anti-American behavior by a U.S. president.

Standing on the same stage as Russian President Putin, Donald Trump says he takes the word of Putin over his own intelligence agencies regarding the election interference in 2016.

Last week, the Special Counsel’s investigation indicted 12 Russian agents who were found to have hacked and interfered in the presidential race in 2016, but today Trump told the world that if Putin denies ordering the disruption into our democracy, then he believes the Russian president.

When a respected journalist like Anderson Cooper leads with, “You have been watching perhaps one of the most disgraceful performances by an American president at a summit in front of a Russian leader certainly than I’ve ever seen,” you know something astonishing has happened.

Even Fox News anchors were critical of the Donald’s performance today.

President Trump: “My people came to me, [Director of Nat’l Intelligence] Dan Coats came to me, some others, they said they think it’s Russia. I have President Putin. He just said it’s not Russia. I will say this, I don’t see any reason why it would be.”https://t.co/d78lF0GlCt pic.twitter.com/W3DDqLV5Ql

“You have been watching perhaps one of the most disgraceful performances by an American president at a summit in front of a Russian leader certainly than I’ve ever seen.” – Anderson Cooper on Trump-Putin summit pic.twitter.com/xHbmAZl0y3

I think this is the most important clip you can watch today.

One of the most conservative men in media, Neil Cavuto, on Fox News, said what Donald Trump did today alongside Putin was absolutely "disgusting."

We were attacked by Russia and the President of the United States, who has sworn to protect and defend our country, is paying compliments to the authoritarian who attacked us instead of confronting him.

He’d rather kiss the ring than defend our democracy. https://t.co/6BGuEzdUiG

Donald Trump’s press conference performance in Helsinki rises to & exceeds the threshold of “high crimes & misdemeanors.” It was nothing short of treasonous. Not only were Trump’s comments imbecilic, he is wholly in the pocket of Putin. Republican Patriots: Where are you???— John O. Brennan (@JohnBrennan) July 16, 2018

From a national security expert who has supported President Trump: “Played like a fiddle. Unmitigated disaster. Embarrassing.”