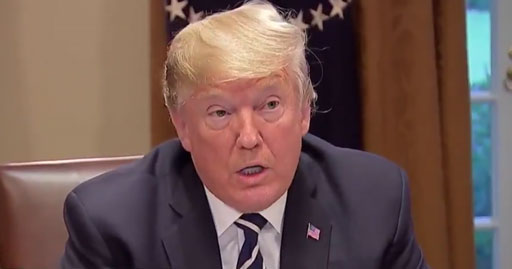 As I reported earlier today, Wikileaks founder Julian Assange was arrested in London today after hiding out in the Ecuadorian embassy since 2012.

Asked by the press today if he “still loves Wikileaks,” Donald Trump pretended to “know nothing about Wikileaks.”

"I know nothing about Wikileaks, it's not my thing," Pres. Trump says when asked if he "still loves Wikileaks" following arrest of founder Julian Assange. Then-candidate Trump repeatedly praised the organization during the final weeks of the 2016 campaign. https://t.co/EDXbyTbtEx pic.twitter.com/eEqMMJWCIb— ABC News (@ABC) April 11, 2019

And yet, back in October 2016, Trump extolled the virtues of Wikileaks after they released thousands of emails from the Democratic National Committee.

Trump repeatedly said he “loved” the organization when it was releasing emails related to Hillary Clinton’s campaign.

Trump Oct 2016: “This WikiLeaks is like a treasure trove,”

Let’s go to the video tape!

Trump just said he knows “nothing about” WikiLeaks after founder Julian Assange’s arrest.

But in 2016, the president used WikiLeaks’ disclosures to repeatedly bash Hillary Clinton during the campaign pic.twitter.com/KdBEgTOWZB

Funny how that works, huh?

"I know nothing about WikiLeaks. It's not my thing." – Donald Trump

It was very much his thing when he said the word "WikiLeaks" 141 times during the last month of his 2016 campaign… pic.twitter.com/MRdnENRovF— Adam Best (@adamcbest) April 11, 2019