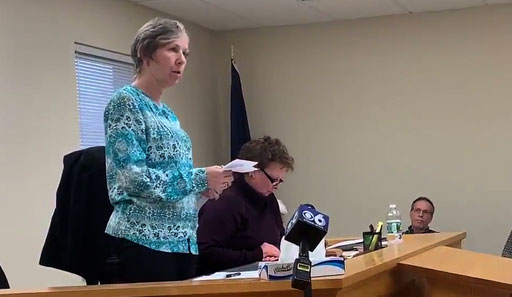 On July 30 last summer, Thomas Hurd and Dylan Toften went to the office of their town clerk in Root, New York, to obtain a marriage license.

Instead of a joyful, upbeat episode in their lives, the men were dismayed to be turned down by town clerk Sherrie Eriksen.

She put the couple off saying they couldn’t get a marriage license because they didn’t make an appointment before coming to the office, according to WRAL.

She also told the men that she has a personal objection to same-sex marriage.

That’s despite the fact that New York state legalized marriage equality in 2011, and the U.S. Supreme Court made it the law of the land in 2015.

Toften took to social media at the time to share the incident writing, “Town of Root clerk is a bigot!!! Refused to do our marriage license. She said make an appointment to have her deputy do it… do your job Andrew Cuomo.”

Gov. Cuomo responded to the post by tweeting, “Marriage equality is our law in NY. The denial of a license to a same sex couple is an unconscionable act of discrimination. On behalf of all New Yorkers, I’d like to congratulate Dylan & his future husband on their marriage.”

Marriage equality is our law in NY. The denial of a license to a same sex couple is an unconscionable act of discrimination.

On behalf of all New Yorkers, I’d like to congratulate Dylan & his future husband on their marriage. https://t.co/OIdxyPhyjb

Several town meetings were held, an investigation was launched, and a lawsuit was threatened by the couple, according to WRGB News.

In the end, an agreement was reached: the town of Root would pay the men $25,000 plus Eriksen would personally deliver a public apology.

And so it came to be on Wednesday afternoon that Eriksen, standing in front of news cameras and town leaders at the weekly town meeting, made her apology.

“In my capacity as town clerk, it is my responsibility to provide marriage licenses to all couples, regardless of sex or sexual orientation, so long as they meet all applicable New York state requirements,” she began. “As such, my office and I will personally will issue marriage licenses to any couple without exception, who is legally entitled to be issued one.”

Her voice wavering a bit, she continued, “On July 30th of last year, there was an unfortunate incident involving Mr Thomas Hurd and Mr Dylan Toften, who came to my office seeking a marriage license.”

“I am sorry for any harm or inconvenience my actions caused the couple, thank you,” she concluded.

Town of Root clerk apologizes tonight 8 months after denying a gay couple their marriage license. The town has also reached a cash settlement with the couple. Hear from them tonight only on @CBS6Albany #MarriageEquality #LoveIsLove pic.twitter.com/e39x399HRK

Hurd and Toften eventually received a marriage license from another town and were married on August 18.

The couple told WRGB that they’re proud they stood up for marriage equality.

“If we had never stood our ground, how many more people would’ve had to go through this?” Toften said.