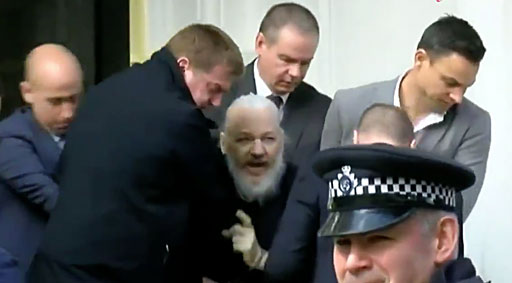 Wikileaks founder Julian Assange was arrested at the Ecuadorian embassy in London where he has lived since 2012.

He’s sought refuge there from sexual assault allegations against him in Sweden.

The United States has charged WikiLeaks founder Julian Assange of conspiring to hack a computer as part of the 2010 release of reams of secret American documents, according to an indictment unsealed Thursday, putting him just one flight away from being in American custody after years of seclusion in the Ecuadorean embassy in London.

The single charge, conspiracy to commit computer intrusion, was filed a year earlier, in March 2018, and stems from what prosecutors said was his agreement to break a password to a classified United States government computer. It carries a penalty of up to five years in prison and is significant in that it is not an espionage charge, a detail that will come as a relief to press freedom advocates. The United States government had considered until at least last year charging him with an espionage-related offense.

Mr. Assange, 47, has been living at the Ecuadorean Embassy in London since 2012. British authorities arrested him on Thursday, heavily bearded and disheveled. A dramatic video showed him shackled and being carried out of the embassy and forced into a police van. He was detained partly in connection with an American extradition warrant after he was evicted by the Ecuadoreans.

VIDEO: UK media outlets are broadcasting video claiming to be the moment Wikileaks founder Julian Assange was arrested and removed from the Ecuadorian Embassy in London after seven years. pic.twitter.com/0IBPWiVCNi

Donald Trump’s former lawyer, Michael Cohen, testified before a congressional committee in February that Trump’s close friend and adviser Roger Stone had bee in contact with Assange before WikiLeaks released leaked emails from the Democratic National Committee in 2016.

GOP Sen. Ben Sasse of Nebraska chimed in about the arrest via Twitter:

This arrest is good news for freedom-loving people. Julian Assange has long been a wicked tool of Vladimir Putin and the Russian intelligence services. He deserves to spend the rest of his life in prison.https://t.co/LJAQeKhrj6 https://t.co/LQpoOoTv1y— Ben Sasse (@BenSasse) April 11, 2019