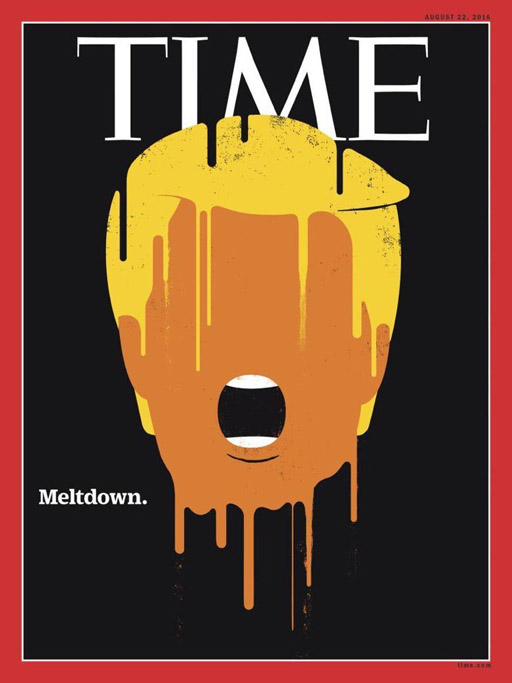 Donald Trump covers the new issue of TIME Magazine but it’s probably not a cover the Trumpster will frame and hang on the wall.

And the cover image is only the beginning as TIME delves into what may be the biggest presidential meltdown in history.

Well worth the read, here’s just a few highlights:

But every bond has its breaking point. For this partnership, the moment nearly arrived in early August. Priebus was on vacation when he learned that Trump had declined to endorse Paul Ryan, the Speaker of the House and a close friend. The chairman had a frank message for the nominee, according to two Republican officials briefed on the call. Priebus told Trump that internal GOP polling suggested he was on track to lose the election. And if Trump didn’t turn around his campaign over the coming weeks, the Republican National Committee would consider redirecting party resources and machinery to House and Senate races.

On the mood behind the scenes at Team Trump:

Like the rest of the party, Trump’s staff has been flummoxed by his political naiveté. They describe a candidate who doesn’t understand the basics of modern campaigns, from why you knock on doors to how to read a poll to why he should be dialing for dollars more aggressively. His headquarters has enough palace intrigue and warring fiefs to rival the fictional badlands of Westeros. “You’re always afraid of getting fired,” says one staffer, “but it’s his fault, not ours.”