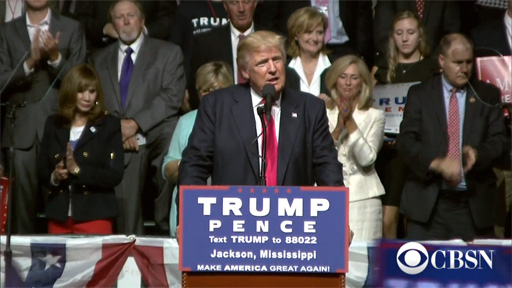 And the political discourse descends even further into the abyss.

While Republican Donald Trump has referred to Democrat Hillary Clinton’s “bigotry” in the past,  he’s now gone full tilt boogie on the accusation last night during a rally in Jackson, Mississippi.

Clinton responds to Trump labelling her a “bigot”

“She doesn’t care about you,” he said, addressing African American voters, who were not in the room to hear his pitch.

“You’ve had her policies. Democrats running some of the inner cities for 50, 70, 80 even over a hundred years. And look what you have right now. Poverty, no education, crime, you can’t walk down the street with your child,” Trump continued. “We’re going to fix it. Hillary Clinton has no remorse.”

While Jackson is predominantly black — nearly 80 percent of its residents are African American — the audience at Trump’s rally was predominantly white.

I keep wondering – if Trump wants to appeal to black voters, why doesn’t he go meet them face to face like in a predominately black church or school or community? How about some honest to go retail politicking?

Trump has brought this campaign season to so many all time lows. #Sad

Even some of Trump’s supporters were shocked by the rhetoric.