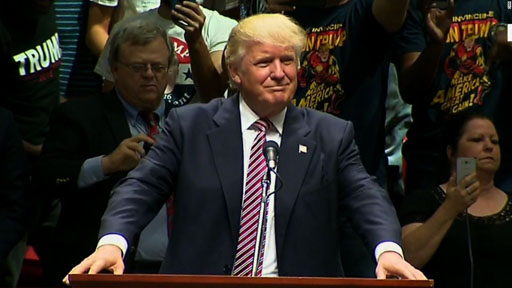 After launching his campaign with an attack on undocumented immigrants, and continuing on for over a year promising his supporters he will deport 11 million of them through using a “deportation force,” Donald Trump finally acknowledges that the entire concept was flawed, ruthless and inhumane.

“Now, everybody agrees we get the bad ones out,” he told Fox News host Sean Hannity. “But when I go through and I meet thousands and thousands of people on this subject, and I’ve had very strong people come up to me, really great, great people come up to me, and they’ve said, ‘Mr. Trump, I love you, but to take a person who’s been here for 15 or 20 years and throw them and their family out, it’s so tough, Mr. Trump.’ I have it all the time! It’s a very, very hard thing.”

Still, Trump said there would be “no amnesty” for undocumented immigrants, even if they have committed no crimes.

Really? After telling the country for a YEAR that “they gotta go,” now Trump says he’s “softening” on his ideas to cope with illegal immigration in a play for the Hispanic vote?

This is the definition of a classic “flip-flop.”

Or is he really not reaching for Latinos, but just wants to look a bit more palatable to Republican voters who were on the fence?